I’ve written several times about the terrific times I’ve had in Iceland, so I enjoyed reading today’s guest post by Ashley Gunther on the summer abroad she spent there:

When I decided that I’d be spending my post-graduation summer living, and playing soccer, in Iceland I was excited to say the least! Playing soccer through college didn’t give me much time to study abroad so this was my chance to live overseas and experience a new life. My brother spent his 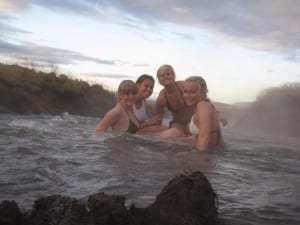 Now it was my turn! Within a week of graduation, I was on a plane en route to this very small island in the North Atlantic, knowing exactly zero people besides a friend of a friend who helped me with my arrangements via Facebook. As much as I tried to research things to do and what to expect, there was really no way to prepare for the summer I was about to have.

I wasn’t surprised to be greeted with icy wind and cold getting off the plane but it wasn’t the most pleasant introduction to my new home. In the next few days I did my best to adjust and settle in which was made much easier by my American roommate and Icelandic teammates. It continues to impress me how well the Icelandic girls speak/understand English and it definitely helped my transition.

It didn’t take long for my adventure to begin as on my second day there, my roommate and I joined a Greater Reykjavik tour. It was great to get a look at the town I was now living in (Hafnarfjörður), the capital (Reykjavik) and the surrounding areas early on.

There are so many amazing things to do in Iceland; I quickly realized I had to be active as possible on a regular basis to get it all done. I had the unusual luxury of the balance between being on vacation and living abroad long-term so I took full advantage. Between our soccer schedule of training and games, my roommates and I—and often some of the Icelandic girls—explored the island and all it had to offer.

We climbed the most beautiful waterfalls, played on incredible black sand beaches, photographed the ever-present lava rocks that make you feel like you’re on the moon, soaked in natural hot springs and geothermal hot tubs, even rafted and went glacier snowmobiling!

But those are the big things that anyone who has visited Iceland will tell you to do…and you absolutely should—the beauty of this country is unbelievable. However, I was determined to go beyond that and between my new friends and a new purchase, I had a long list of awesome things to try. 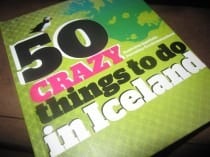 50 Crazy Things to do in Iceland

turned out to be one of my best buys this summer. This small book highlights some of the most outrageous things people can do in Iceland. Its suggestions tend to be exaggerated situations taking advantage of the unique conditions that only Iceland has, and of course we did our best to accomplish as many as we could. My goal was to document my accomplishments with photos and paste them into my book essentially creating a scrapbook of the most unusual things I’ve ever done!

By the time we started our “crazy” to-do list, we’d already completed some, like (weirdly enough) “fight with birds.” We’d spent a weekend in Olafsvik visiting a friend’s family and encountered the most aggressive, territorial birds I’ve ever seen. They’re called Kria (or Arctic Tern) and will literally attack you if you get too close. Like mini missiles, they fly straight down aimed directly at you. Luckily, I just took pictures at a safe distance of our friend, Katrin, who was dared to get close.

Another crazy thing we did was #8: “Stay awake for 24 hours.” The key to this one is that in the summer months, Iceland experiences 24 hours of sunlight so at night people are able to do things they usually could only do during the day. For example, go midnight golfing. Although we did go midnight golfing at one point, we didn’t do either until after the cycle changed and the sun started going down normally and we had to complete both under nighttime circumstances.

Our 24 hours was exhausting and completely entertaining. We filled our day with shopping, sightseeing, searching for Icelandic sheep (another “crazy” thing), practice, a late movie, extra-late grocery shopping, playing outside in the rain, painting our nails, doing handstands (or attempting to), among other random things to keep the clock moving. We documented every hour with a picture and I still laugh looking through them.

“Party for 4 days and 3 nights” …check. It’s called Þjóðhátíð, a long weekend’s worth of music, partying and friends in Vestmannaeyjar (Westmann Islands) unofficially marking the end of summer. The festival was filled with music, dancing, food and friends, and it was a one-of-a-kind experience that I hope to do again. We stayed up all night enjoying all the festivities and I even had my first smoked puffin—the Westmann Islands are famous for it. 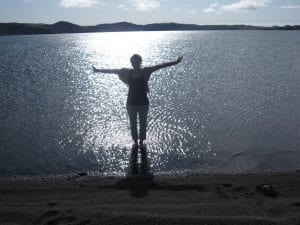 “Get a tattoo in Icelandic” …check. Less than 1% of the world population speaks Icelandic since it’s pretty limited to the people living there. I decided on a pink peace sign-inspired design with the word fegurð, meaning “beauty.” Every time I see it, I think of all the beauty that was that summer: the people I met, the country that’s now a part of me and the effect it’s had on me.

My dad is constantly reminding me that phases in my young life are relatively short and it’s important to realize there’s an ending. That way, I’m able to make the most of the time I have. I like to think that this summer was the epitome that. I’ve only mentioned a few of the “crazy 50” and from eating putrified shark, to taking natural mud baths and boiling eggs over hot springs, the summer of 2009 is something I’ll never forget.

So say “yes” to new experiences and be open to trying new things. It’s the perfect combination for an unforgettable experience.

Ashley Gunther recently graduated from California State University, Chico. She majored in journalism with an option in public relations and a minor in management of human resources. She is currently working at a tech PR agency in San Francisco and enjoying life in the bay while starting her career. She hopes to visit Iceland again in the near future and is looking forward to an Icelandic visitor, her friend Lena, this July!