If Ko Phi Phi is Disneyland than Ko Phangan is like some sort of psychedelic war zone. Actually, that’s not quite right. Only Haad Rin, the southernmost tip of the island is a wild circus party of buckets, bars, flashing lights and fire shows.  The pinnacle of the partying is the monthly Full Moon Party when the area explodes with drunken twenty-somethings.

My guidebook describes the event as “Apocalypse Now without the war,” and that’s pretty damn accurate. At night the beach is alive with thumping bass and battling dancers wearing tribal face paint. The fire dancers and flaming torches which illuminate the sand further enhance the apocalyptic feeling. It’s thrilling yes, but also slightly sinister. When the sun comes up the beach is a wasteland of abandoned flip flops and empty buckets. 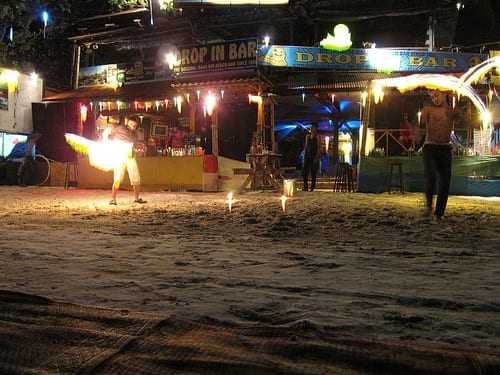 And, like a war, there are serious casualties. This tiny town has over 40 medical centers- all catering to injured tourists. Some will be burned playing with fire, others will fall, fight or attempt to go swimming while seriously intoxicated. Another danger: the police, who troll the beaches arresting anyone possessing or attempting to purchase drugs. Still other people end up drugged, robbed or ripped off. It’s a treacherous place.

It’s all worth it though, if you can keep your wits about you. I was at the January 2011 Full Moon Party and had a great time. I managed to emerge relatively unscathed, by following some simple rules almost religiously. Here’s how you can too:

1. Always Wear Shoes– Easier said then done- I had TWO pairs of flip flops stolen during the week. Most businesses ask you to take your shoes off before entering, but once outside you must keep your shoes on at all times. Even on the beach- where broken bottles and sharp objects are scattered like hidden booby traps.

2. Leave your valuables locked up– There are a lot of people out there would would be happy to relieve you of your belongings while you are getting buzzed. Usually you won’t even notice your stuff is gone until much, much later. Every morning someone in my hostel would loudly lament their lost camera, phone or wallet. One unlucky guy was pick pocketed by an overly friendly lady boy. Seriously- take nothing but the money, and only a limited amount of that

3. Do NOT buy drugs- The number of cops- in uniform or undercover on the beach is staggering. If you have drugs on the beach you WILL be arrested. If you buy drugs from someone on the beach they are almost certainly undercover and will bust you. They have quotas to meet and the do not give a crap about your excuses. And I’m pretty sure Thai jail is the last place you ever want to be.

There’s a loophole to this one though – Certain well known bars pay off the police in advance, to be totally left alone. At these bars, you can hang out, smoke some pot, or even indulge in a “magic mushroom milkshake” without fear of being arrested. The key is to only buy from the bar and to keep the drugs IN the bar. Once you walk outside you are fair game. I’m sure this is one of those things where the rules are constantly changing though so always be alert. 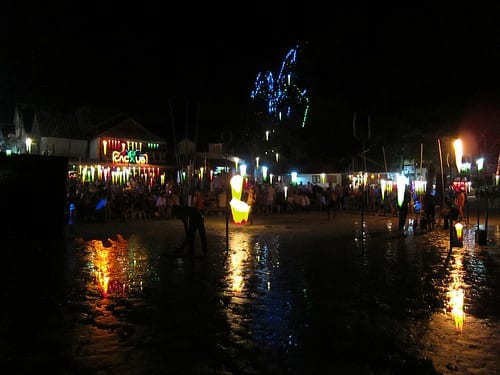 4. Don’t go in the water– It’s tempting I know. You are partying on the beach and the ocean is just RIGHT THERE being all inviting and calm. Don’t fall for it. Ever year several drunk tourists drown giving in to that temptation. If that’s not enough of a deterrent remember that for 50% or more of the population the ocean makes a very convenient toilet. Given the amount of people I saw using it as a urinal I’m pretty sure the surf is like 75% pee. Ick.

5. Don’t play with fire– Not joking. Everywhere you go in Haad Rin you see people walking around with white square bandages neatly taped to their arms and legs. The reason? An off fascination with fire and a total disregard for personal safety. Most of them have become victims of the Fire Jump Rope. That’s right, a jump rope. Made of FIRE. For some reason this is absurdly popular at the Full Moon Party and people line up for a chance to try their luck. I watched this phenomena for about an hour one evening. Do you know how many people got burned? ALL of them. Every. Single. One. 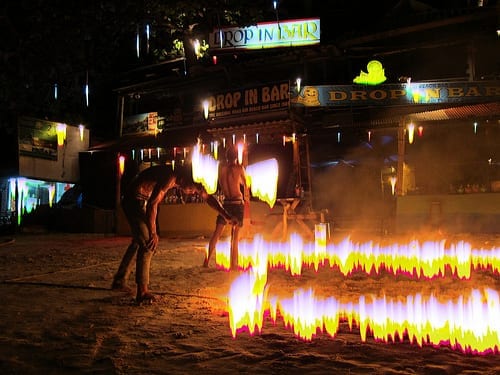 6. Watch your drinks– in a place where they sell liquor by the bucketful (literally) it can be very easy to lose track of how much alcohol you are consuming. In the morning the beach is covered in vomit and I’m sure quite a few people make the trip to the hospital for alcohol poisoning. Use your common sense- eat a big meal, keep track of how much you’ve had and know when to stop. Also, it pays to keep an actual eye on your drink. Druggings has been known to happen

7. Stay Hydrated– When you’re lying in the sun all day and drinking all night long- dehydration can hit you like a kick in the stomach. Preempt this by drinking lots of fluids (coconut juice is full of electrolytes) and not overexerting yourself. This one really sneaks up on you, as Mike can attest to. 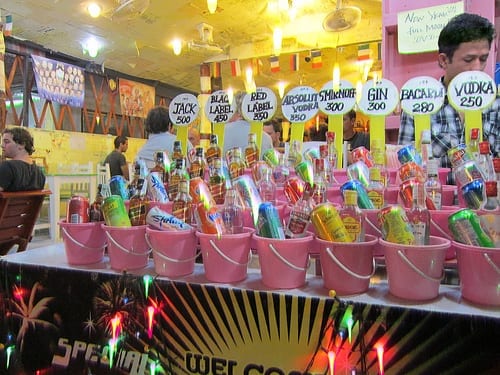 8. Have a buddy– Mike can also back me up on this one. With so much going on it’s really important to have someone keeping an eye on you – safety in numbers if you will. Someone who can help you find your hostel at the end of the night, take care of you if you get sick or just make sure you don’t do anything stupid. You, in turn, do the same for them.

If you’re there solo don’t worry- The people in my hostel all made fast friends with one another. By moving in a large group we ensured everyone was being taken care of and enjoying their Full Moon Party experience.

9. Don’t be an asshole– Okay, this is not so much about safety as just a personal plea. Some of the people in Ko Phangan, seem to think that just because they are there to have fun they have full license to be a thoughtless western jerk. This includes one idiot of the British variety in my dorm who peed on the floor in the middle of the night. It wasn’t much of a surprise since I’d already seen him be terribly rude to the staff and a dick to just about everyone else. Don’t be that guy. Be polite, be respectful, just be a decent human being, it’s not THAT hard.

It sounds stressful- but really it’s not. Most of the time you busy making new friends, covering yourself in body paint and dancing until the sun rises. If you just keep your wits about you, then you can easily avoid most of the booby traps that take people down at the Full Moon Party. It’s important to remember that just because you are having a good time doesn’t mean you can turn your brain off. 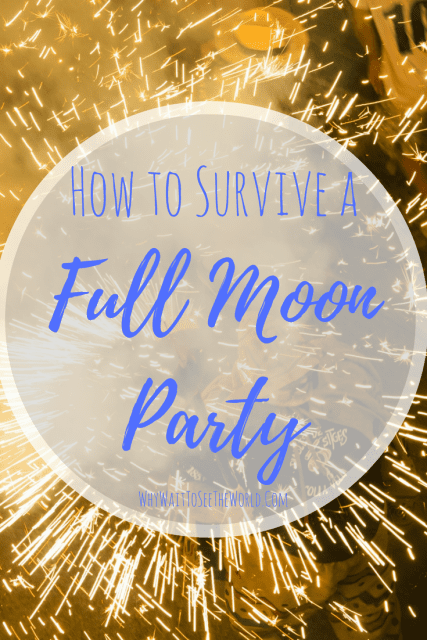 43 thoughts on “How to Survive the Full Moon Party”