Alex Pollack is originally from Memphis, Tennesee and is starting this fall as an MFA student at The University of Central Florida. In 2007 and 2008 he spent a year teaching English in Bundang, South Korea, and experience he chronicled on his truly excellent blog Gorilla Teacher: Diaries of a Young American in South Korea. He is an experienced writer with an eye for detail and luckily an old friend of mine from college. He agreed to talk to me about his experiences abroad teaching English in Korea: 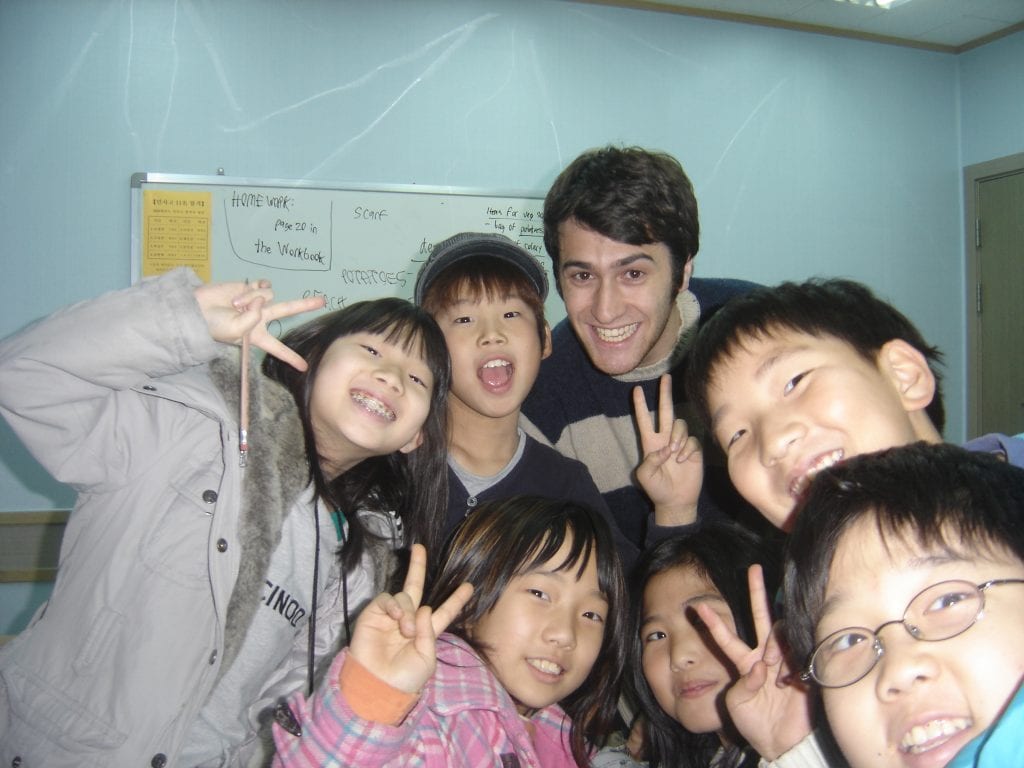 How did you come to the decision to go teach English in Korea?

In May 2007, I graduated from Emory University with a degree in Creative Writing, or Unemployment, as I put it to my friends.  Not only did I have no job, I had no prospects.  I moved home to live with my parents and soon picked up some hours at a used bookstore.  Life wasn’t bad, but it wasn’t great either.  Nothing was happening.  I had long-term goals related to writing, but in the meantime, I only blogged and shelved books.  I knew I had to learn more, see more, live more.

And then I got an email that changed my life.

A friend from my graduating class was teaching English in Seoul, South Korea.  I remember him telling me of these intentions months before and me thinking, “Huh?  Why the hell is this guy going to Korea?” It sounded so far and so, well, random.  I couldn’t picture myself doing anything like that.  I wasn’t a particularly daring guy; I was still proud that I’d tried calamari during my senior year of college.  But the email triggered a desire I didn’t even know I had, a desire to take a chance and do something outside of myself.  The email told of a teaching position opening up at my friend’s school.  I immediately told him I was interested.

The biggest question pressing down on me was a thrilling one: Why not?  Why not go to Korea to teach English for a year?  When I learned that the job offer included a free studio apartment, free airfare, and a reasonable salary for an eager-to-travel-and-enjoy-life twenty-something, the decision was a no-brainer.

I was going to Korea!

What was the reaction of your friends and family like when you told them you were going to teach English in Korea?

Friends were surprised but supportive.  They agreed with my “why not” justification in taking the leap.  It’s not as if I had a can’t-miss opportunity waiting for me in the States; there was no reason for me not to go to Korea.  I was single, barely employed, and antsy.  I had to go.  Plus, as an aspiring writer, it made a whole lot of sense to spend a year in a foreign country where newness abounded in people, food, and culture.

My mom took the move hard, the fact I’d be spending a whole year so far away from home.   I hoped that the whole webcam thing would ease the transition.  It did.

The support came less from the administration and more from my fellow teachers. I taught English at a “hak-won” (Korean for language academy, or the pejorative, cram school).  Some hakwons have only one American-born teacher; Leadersville English Academy had a dozen American-born teachers, including my university friend.  Most of these teachers were very generous in not only easing my transition into my job, but into my life as a foreigner in South Korea.  Most of them transformed from mere colleagues into valued friends.

As for training, there was little of that. I observed one of my colleagues teach a day of classes.  The next day, I was thrown into the thick of things, meaning overnight I had become a teacher responsible for six classes of Korean students.  Bam.  Just like that.  Learn-as-you-go was the idea at Leadersville, and in my understanding, the situation is the same at many hakwons, though some schools offer more organized training. 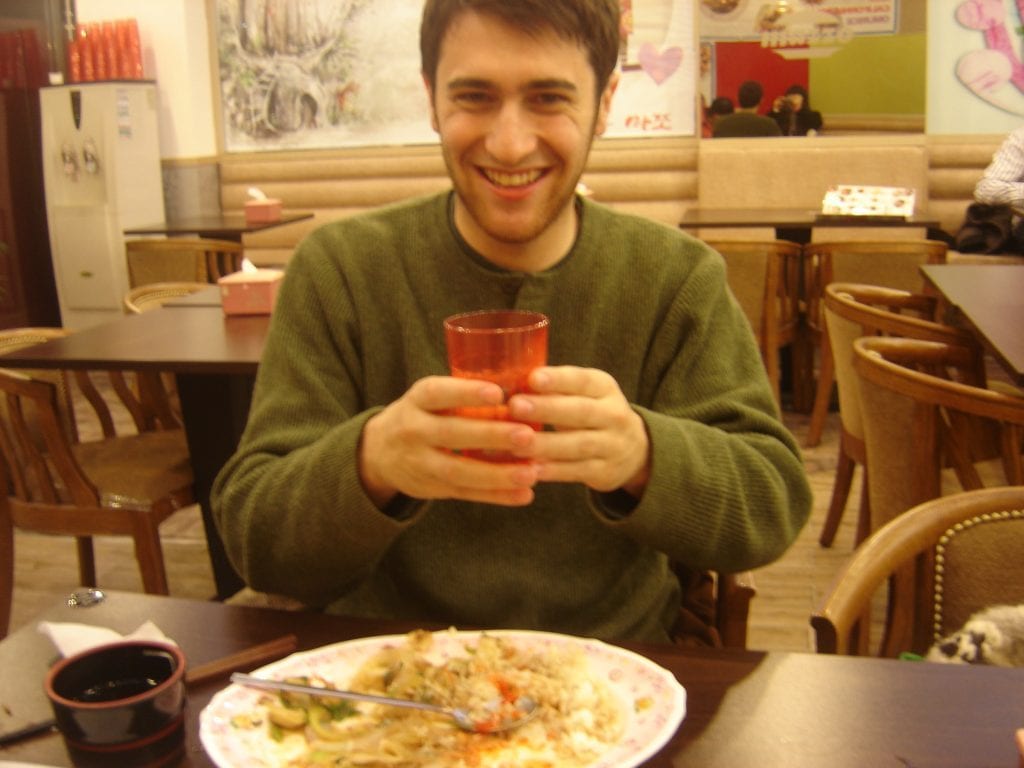 Before I came to Korea, my friend who’d recruited me told me this: “You will see something new every single day.”  He was right.  I came to the country expecting to be surprised, and indeed, I found something reliably and pleasingly surprising each day, whether it was the so-spicy-it-was-sweaty taste of jayookdopbop (spicy pork and rice) or the sight of a teenage couple wearing identical t-shirts, jeans, and tennis shoes to show off their couplehood to the world.  I guess what I’m saying is that things in Korea couldn’t be different than what I’d expected, because my expectations had no bounds.

Maybe I should take a step back.  When I say surprising, I mean surprising, not earth-shattering. It’s not like I was in the jungles of Africa.  Korea has things that are more comforting than surprising: air conditioning, Baskin Robbins, California Pizza Kitchen, high-speed internet everywhere, and most of the biggest American blockbuster movies released at around the same time they’re released in the USA.  (Though more people on the Korean net are playing Starcraft than reading the Drudge Report, and some people at the movies are munching on fried squid in their assigned seats.  Yep, assigned seats and fried squid are the norm at Korean movie theaters, but don’t worry, they got popcorn, too, in butter and caramel varieties.)

How long were you teaching English in Korea? Did you experience a lot of homesickness and how did you combat it?

I spent exactly one year in South Korea, moving there in October 2007 and returning to the U.S. in October 2008.  The first three months of my contract formed what I like to call the “honeymoon period”: everything was new, everything was exciting, everything was worthy of noting and observing and enjoying.  I loved the spicy kick of the food, I loved the camaraderie with my new co-workers/friends, I loved the independence of a growing bank account, I loved the feeling that I was actually living something rather than just talking about something.  I visited China, I visited Japan, and I visited the Korean countryside.  My parents visited me in May of that year.  It was great.

And then I became homesick.  I still liked the food and I still liked my co-workers, but the job started to wear on me.  My kids started to annoy me, the younger ones too rowdy and too disrespectful, the older ones too exhausted and beaten-down by a life of perpetually studying for TOEFL exams.  I began to question what exactly I was accomplishing as a hakwon teacher.

When I realized I would not come back for a second year in Korea, it became difficult to stay motivated on the job.  It also became difficult to make new friends, because in the back of my mind, I was thinking: well, what’s the point? I’m gone from this place in three/four months anyway. As a result, my let’s-do-THIS adrenaline from my early months in Korea faded into a kind of waiting-it-out complacency, still enjoying much of my experience, but thinking about that obscure, looming idea of whatever  was supposed to happen after Korea.  How did I combat the homesickness?  I talked with my co-workers who had experienced the same.  Looking back, I feel very fortunate for my year in Korea, for if I’d gone to a school where I’d be the only American-born teacher and the only native English speaker, I think I’d have a far more challenging experience.

What was one particularly memorable moment from your trip?

On New Year’s Eve, I got separated from my friends in downtown Seoul and spent the night searching for them with the help of two strangers who just so happened to be Korean high school girls.  They spoke little English, but with the help of their cell phone dictionaries and friendly smiles, they lent this foreigner a helping hand. Don’t worry, nothing salacious happened.  It was a PG-rated night.  They brought me to a Internet cafe, where I emailed my friends with these girls’ phone numbers, for I had no cell phone.  These girls were incredibly sweet, and they laughed when I sang Justin Timberlake songs as we walked in the shivery Seoul cold.  Before I finally gave up and just took a taxi home, I bought them dinner as a thank-you.  I never saw them again, but I’ll never forget them. 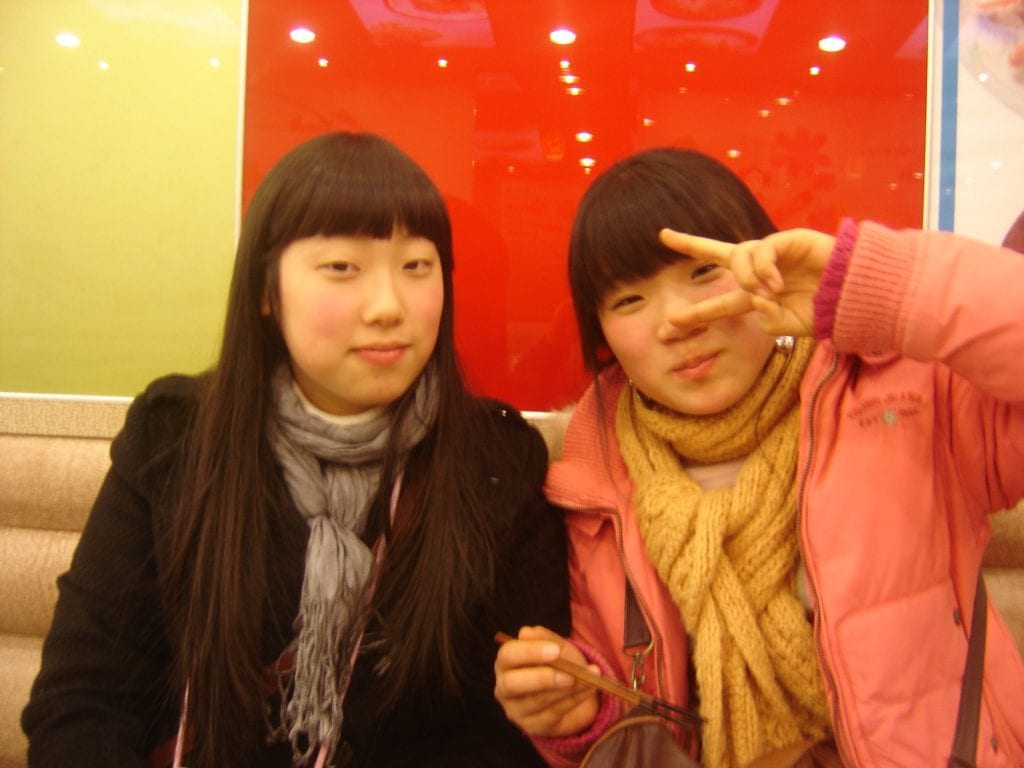 What are you up to these days? In what ways has going abroad for a year affected your current life (for better or worse)?

Later this month, I’ll be starting a two-year graduate program at the University of Central Florida to pursue an MFA in Creative Writing.  My year abroad has definitely informed and expanded my writing; since my emphasis is on creative nonfiction, I have already found myself writing plenty about my year in Asia.  Sometimes, it’s hard to believe I was even in Korea.  But a flickering memory, a picture, a video, or a blog entry brings it all rushing back.

What advice would you have for other people considering teaching English abroad?

Find people you know who’ve done it or are doing it.  Or people who know people who’ve done it or are doing it.  I’m clearly biased, but I recommend the path of going the referral route through a friend.  When this is not possible, you can choose a recruiter.  Recruiters will place you at a school, but be cautious: they may not always be 100 percent honest with what they know about your future place of employment.  This is why you must do research of your own, googling the school.  Most likely, you’ll find the school mentioned in a blog or two.  Contact the blog’s creator and pick his brain.  It’s not always in the recruiter’s best interest to give you access to current teachers at the school in which you’ll work, so you have to take the onus for figuring out if your school is a decent place to be employed.

eslcafe.com is a useful resource/discussion board in finding information on teaching English anywhere and everywhere abroad.  One caveat: a lot of negativity is present on these boards.  Take what you read there with a grain of salt.  Some bitter expat teachers use those boards to vent their frustrations, rather than to shout, “I LOVE MY JOB!”

Before I went to Korea, I read several blogs.  I maintained one myself during the year.  Skimming teacher blogs is a good idea, but just as is the case with eslcafe.com, some teacher blogs are bastions of negativity.  Others are more balanced.  Most usually come from a highly specific point of view from one man or woman’s teaching experience in a particular school.  Nobody is a voice of God when it comes to teaching abroad.  The best you can do is find the gods who speak to you, and let them lead you to the potential highlights and lowlights of an experience you’ll soon make your own!