Now, if you’ve been reading this blog for a little while, (I mean it’s been over 3 years! CRAZY!) you know that I am not a thrill seeking, reckless, traveler.

I do, however, firmly believe in not missing out on once in a lifetime experiences. That means I’ll probably jump out of a plane some day even though the very thought of it scares the poop out of me! Which is why deciding to volcano board down Cerro Negro volcano in Nicaragua was a bit out of my element.

To be fair, I had it in my mind that it wasn’t nearly as scary as it actually was. 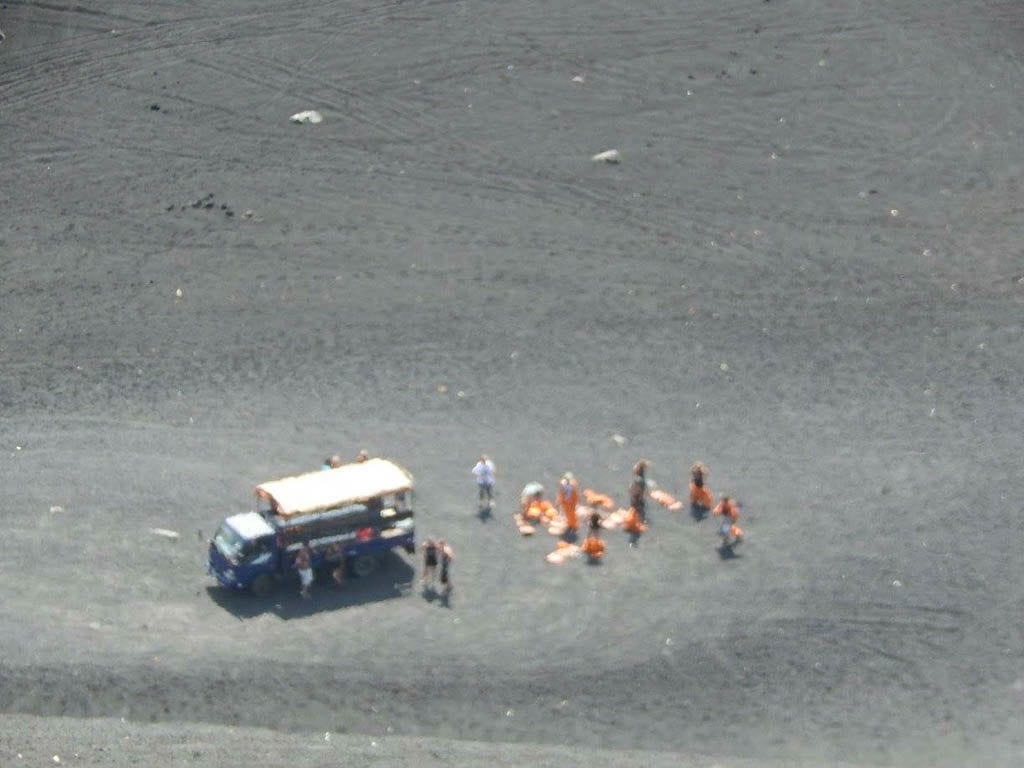 My travel buddy, Jules, had her heart set on volcano boarding and it sounded like something I didn’t want to miss so I eagerly signed up with her. What I was going to find out was that I’d be sliding down an active volcano going upwards of 30mph on a thin piece of wood wearing an orange suit that makes me look like I am a character in Breaking Bad.

The volcano, Cerro Negro, is the only of its kind. It’s a young volcano, only 160ish years old, and still active. By active, I don’t mean it’s spewing lava but if you were to get to the center you’d melt instantly. That kind of active.

Boarding down it can take place because the volcano is covered in small grains of volcanic ash instead of hard lava or large rocks. It’s a bit more granular than sand and is basically glass, hence the orange suit.

We began the day by hopping in a large truck and taking an hour ride or so out to the volcano. 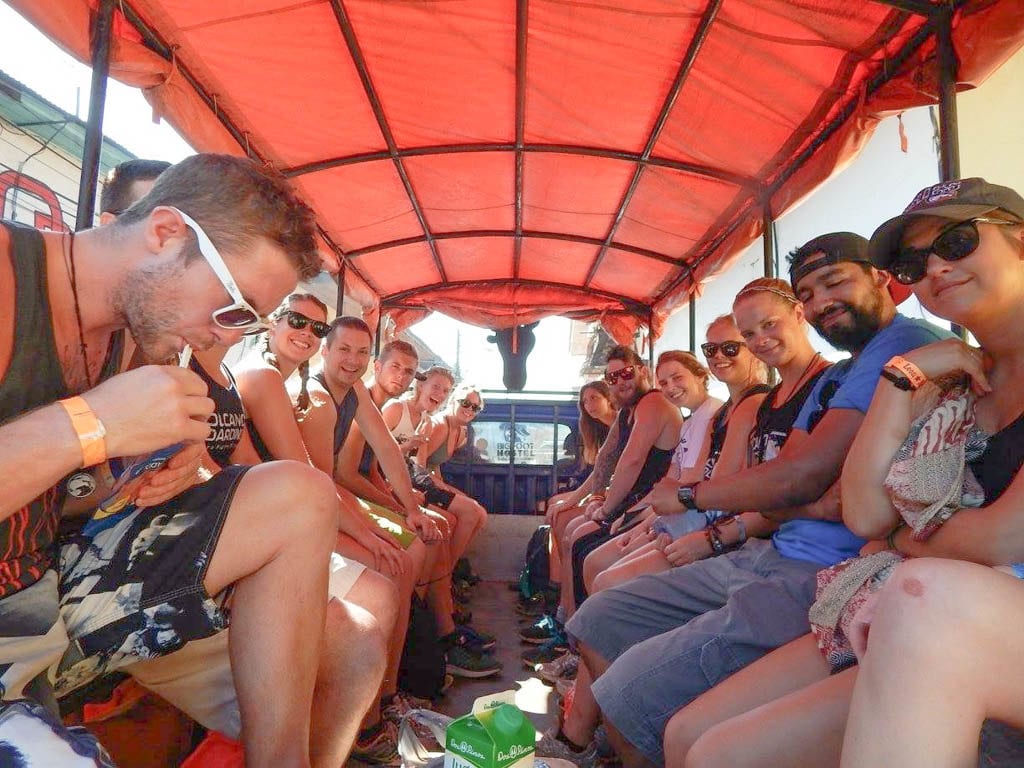 Then it’s about an hour hike up the volcano carrying your wickedly heavy board. I actually payed a guide to carry mine. Sorry, it was freaking heavy, and I was out of shape and didn’t want to be the last one up again. Best $5 I ever spent.

When we got to the top we were basically blown off by the crazy wind. It’s over 2000 ft. so it’s no small little hill.

Once we got to that point I got nervous. The pitch of the volcano is a whopping 41 degrees. THAT’S A LOT.

Standing at the top, you couldn’t see the path you were about to board down. Terrifying.

We took a bunch of funny photos at the top to try to ease the nerves before buckling down, donning our suits and getting to town. 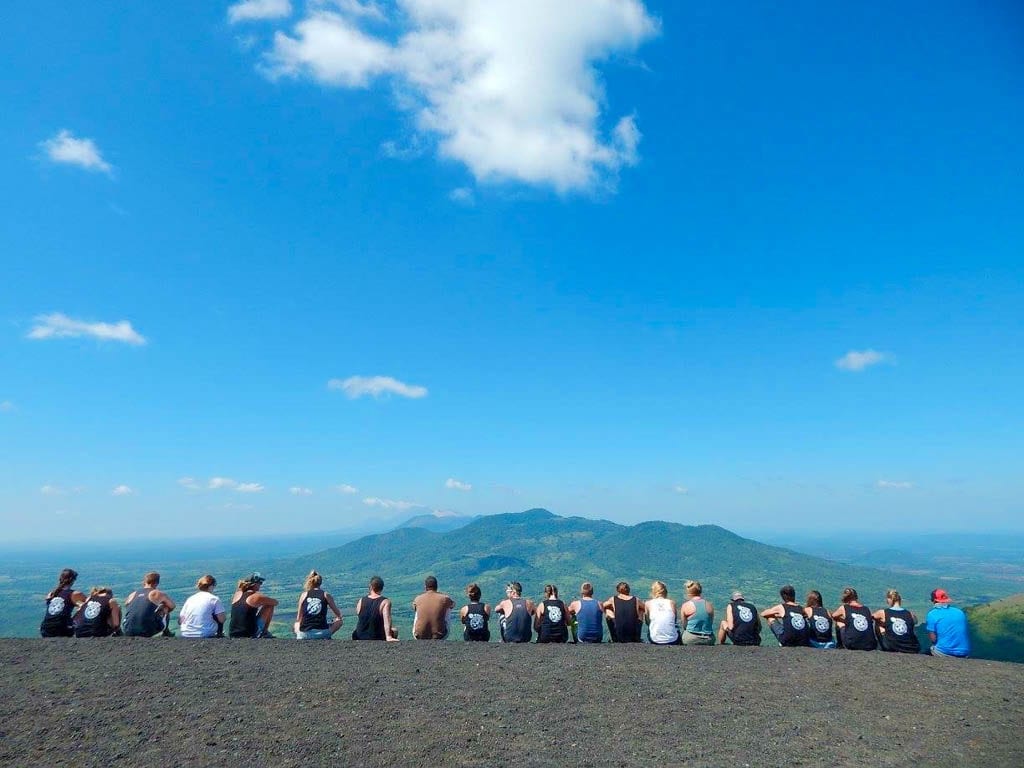 When the time came, we all took out our orange suits and goggles. I added a scarf around my mouth as word on the street was you inhale a ton of ash on the way down and my lungs were still recovering from my last volcano adventure. 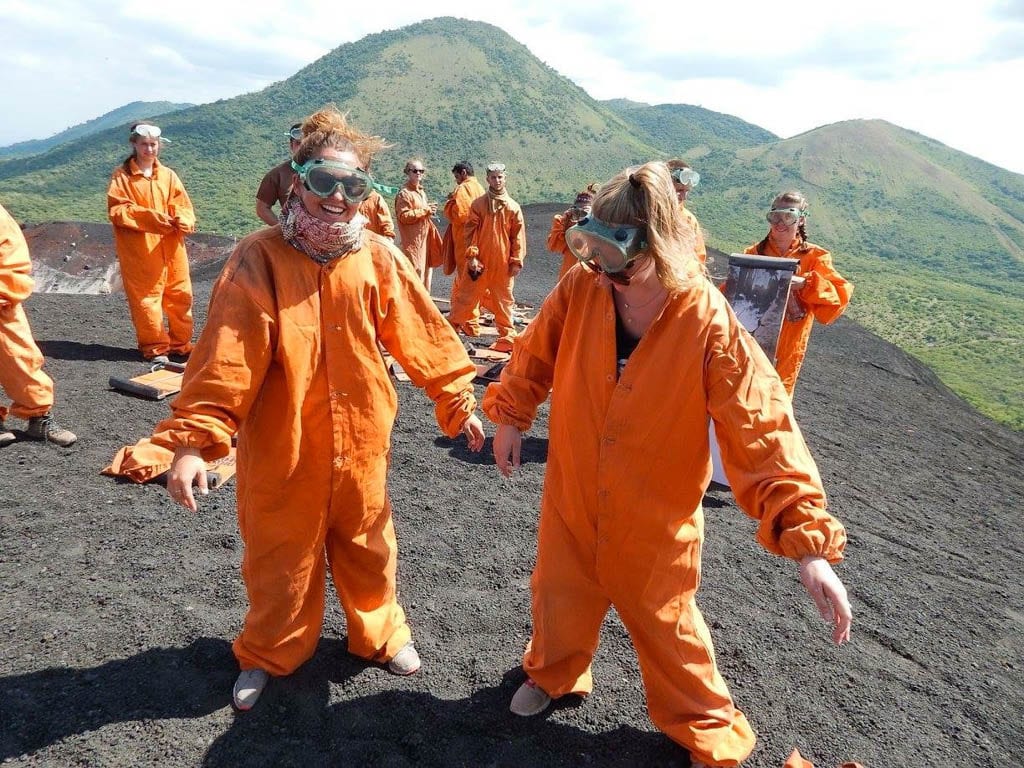 We all sat on the edge of the volcano listening to steering directions and what not and I was getting the jitters.

I let one or two people go and then I decided if I didn’t go right then, I wasn’t going to go. 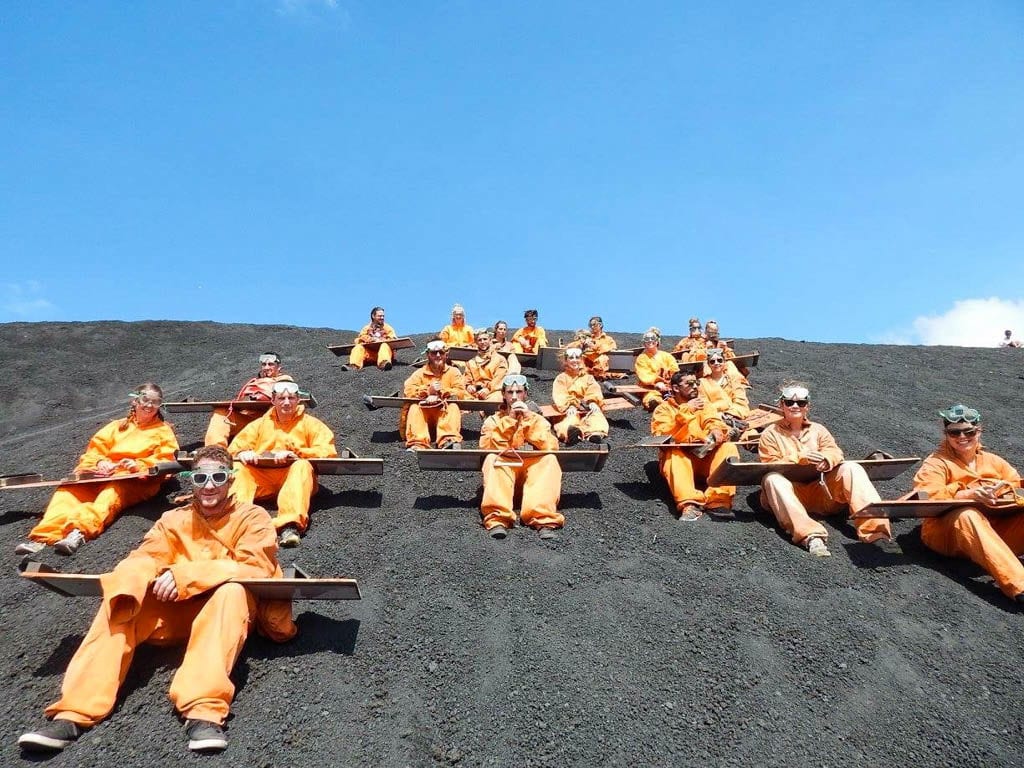 ::::btw- I am getting diarrhea cramps just reliving this…..

I got myself on the board and made sure I talked myself through how to stay going slow and off I went.

I crawled at first. Literally. I kept basically stopping because so much ash was getting on board. But that was completely due to the death stomp I had going on with my feet.

You lean back to go faster and you put your flat feet down to go slower and man I was dug in.

I fell off at one point but I was going like 2 mph hour so that was ok.

I held my breath and prayed to the volcano gods.

I clocked close to 30mph. ON A PIECE OF WOOD THAT WAS BASICALLY A TOBOGGAN.

You slide to a stop at the base and then you get to look up and have that moment of HOW THE HELL DID I LIVE THROUGH THAT?

I actually had the pleasure of watching the two girls after me crash and burn while trying to slow down at the point that I realized that wouldn’t be possible, so Megan=1, Cerro Negro=0.

Was it thrilling? YES.

Is it something I will ever do again? HELL NO.

Which is how I feel about just about every stupid decision I’ve ever made. 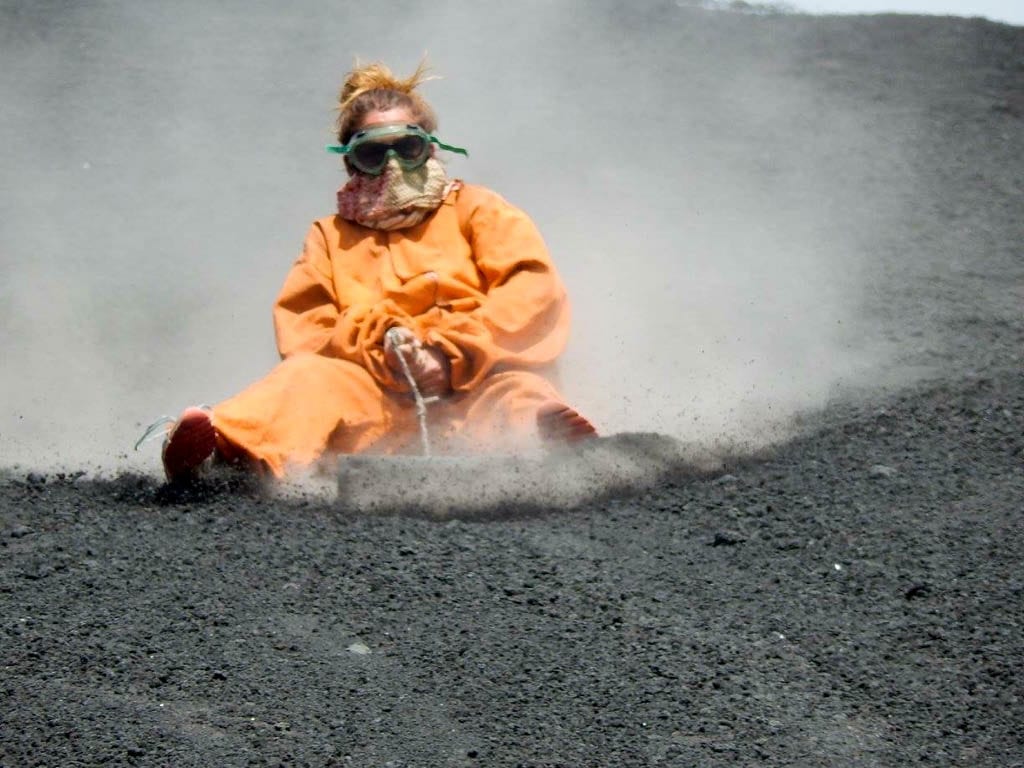 Basically, though, unless you do something stupid, you’re going to be fine. I ran into a guy who put basically all of his teeth through his lip and busted his nose up bad because he tried to stand going down. DUMB. Don’t do that. 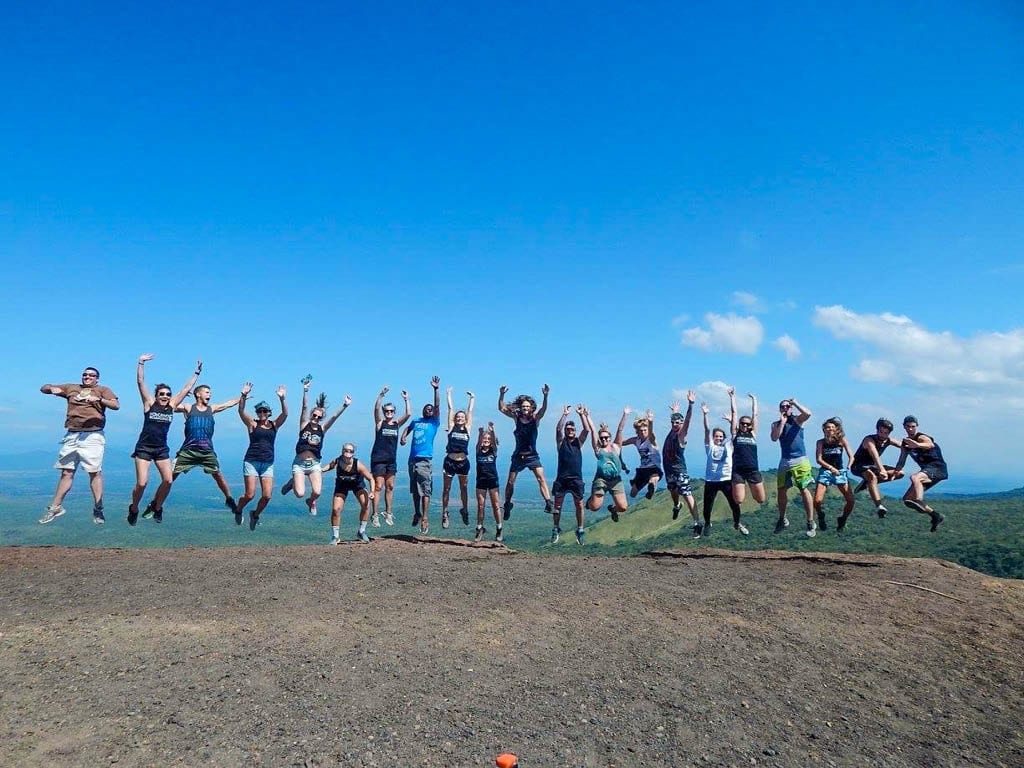 There are a few companies that you can go through to go volcano boarding. I opted for Bigfoot Hostel but I’ve heard great things about Quetzaltrekkers. Bigfoot only allows one boarding while Quetzaltrekkers let’s you do it twice and donates most of their profits to charity.

Bigfoot actually had a guide for us that took pictures of the whole experience for us including action shots halfway down the mountain so we didn’t have to worry about the safety of our cameras during the board.

Both have quality boards, however, so you can decide which to go with.

It costs around $30 for the whole thing, but Bigfoot gives you a free t-shirt and a gnarly shot experience to try when you get back.

Would you ever go Volcano Boarding????