Now that the secret is out I am excited to share a bit about what I’ve learned from traveling while pregnant the last few months. I want to share because when I was googling I didn’t find close to enough on the subject. In some ways, it’s the same as travel used to be, but in many ways, it’s pretty different to travel during first trimester.

By the end of this pregnancy I will have (hopefully) traveled during all three trimesters, so I suppose this is part one of a three-part series. (See Part 2 and Part 3 Here) When I was 12 weeks pregnant, in February, I went on a work assignment to Iceland. I was pretty nervous. I was only just starting to feel human again after several months of feeling completely crappy (seriously, early pregnancy felt just like when I had Mono senior year of high school). But this assignment was too good to pass up and truthfully I was dying to see Iceland again, so I decided to power through. Here is what I learned for you guys:

Important Caveat: If there is one thing I’ve learned from pregnancy it’s that every single woman’s body is completely and utterly different. I also have fortunately have had a healthy, very low-risk pregnancy. My experience may not be your experience, but hopefully, it can at least give you an idea of what to expect. As always, you should talk to your doctor about any special concerns you might have.

Your first trimester of pregnancy can be pretty scary because you have a higher chance of miscarriage through those first few months. As a result, you may want to choose your destination carefully – you will want to have easy access to a hospital in case god forbid, something happens. It’s not really the time to go wandering off in the Amazon or visit a remote tiny island.

Which isn’t to say you absolutely can’t. Look at my friend Nellie who traveled all through Central Asia, walked the Camino de Santiago and camped in Mongolia while pregnant (of course, she didn’t know she was pregnant at the time). For every rule, someone is the exception.

Of course, if I had full choice, I’m not sure I would have gone with Iceland during a time I had to miss out on the amazing hot springs, but at least I’d been to the Blue Lagoon previously.

Flying is pretty uncomfortable in the best of times, so of course, it’s even worse when you travel during first trimester. The flight to Iceland was a solid 8 hours, and even though IcelandAir boosted me up to Economy Plus (thank goodness) it felt epically long.

TIP: Get an aisle seat. Pregnant ladies are at a higher risk for blood clots so it’s important to get up and move every hour or so. Luckily you will probably have to pee every hour or so anyways so that’s the perfect excuse. My OB told me not to bother with compression socks but do whatever makes you comfortable.

TIP: Bring snacks! When a pregnant lady is hungry it’s a serious emergency. Don’t leave yourself at the mercy of inflight meals; pack lots of snacks for yourself just in case. I brought string cheese, granola bars, chocolate and a couple other goodies and kept them in my bag all trip long just in case the hunger pangs hit.

Jet Lag is a Real Bitch

The worst part of the first trimester (for me anyways) was the bone shattering tiredness that made it feel impossible to do much of anything. Although that had started to clear by week 12, jet lag definitely compounded the feeling, causing me to doze off all over the place. Give yourself a break and try to opt for an easier itinerary with lots of potential nap breaks.

The lag was even worse when I got home, knocking me flat on the couch for several days. If you travel during first trimester of your pregnancy definitely schedule yourself a cushion for recovery time.

TIP: Allow yourself the caffeine if you need it. My doctor told me 200-300 mg of caffeine a day is fine. That’s several cups of coffee or tea that can make all the difference in actually being alert enough to enjoy your day. This is obviously a personal choice, but my feeling is that when you travel during first trimester it is no time to try to be a hero.

TIP: Drink tons of water. Pregnant women are already supposed to consume 64 oz of water a day, but during travel, I would try to up that. Flying is dehydrating. Jetlag is dehydrating. You’ve got some compensating to do.

Drink a ton of water the day before your flight (and avoid salty snacks). Bring your own water bottle and refill it every chance you get for maximum hydration. Remember that the caffeine I mentioned above can be dehydrating so chase your coffee with water.

Your Diet Will Change

Everyone knows that one of the hardest parts of the first trimester is morning sickness. I got off relatively easy- no puking for this girl, but I did have a lot of aversions to things I typically love, like most red meat and a lot of vegetables. When you couple this with the list of off-limit food items that every preggo gets to know by heart, menu options can feel pretty limited.

Somewhat luckily for me, Icelandic cuisine isn’t really my favorite, to begin with. I wasn’t too bummed to miss out on the smoked lamb, or the ubiquitous hotdogs (both pregnancy no-nos). Other stuff was harder, like the gorgeous local steak that I had to order (sigh) well done.

TIP: Let people know what’s going on. Normally people try to keep their pregnancy a secret during the first trimester, but I think it’s okay to have looser lips when you travel during first trimester. One night my hosts took me to a restaurant known for its craft cocktails. It was definitely a bummer to sip my plain water when everyone else had fancy drinks. Luckily my companions knew what was up and asked the bartender to make me a custom mocktail, which definitely cheered me up!

TIP: Go easy on yourself. My biggest suggestion is to just let yourself off the hook. Maybe you’re not going to eat as locally as you might like, but that’s okay this time around. If like me, you just want to order avocado toast for lunch every day, just do it. If you’re craving ice cream even though it’s 10 degrees outside… well who is going to tell a pregnant lady no?

Yes, pregnancy is a huge, life-altering event, but man, pregnancy is long. You have to get on with your life even while you’re growing a baby. For a lot of people that means still traveling – either for business or pleasure. While the first trimester isn’t the easiest or most enjoyable time to be traveling, it’s certainly doable. I think it’s important to know yourself and your limits and to give yourself the slack you need.

In the end, I was really glad I went to Iceland, but also really happy when it was time to come home. I’m happy that I went at the tail end of my first trimester when my symptoms weren’t quite as severe as they had been even a couple weeks previously.

The best part of my trip was on the last day when I browsed the shops in downtown Reykjavik and picked out a children’s book for my soon-to-be baby. A memento of the first trip we ever took together.

Read on to see how travel during my second trimester and third trimester went as well! 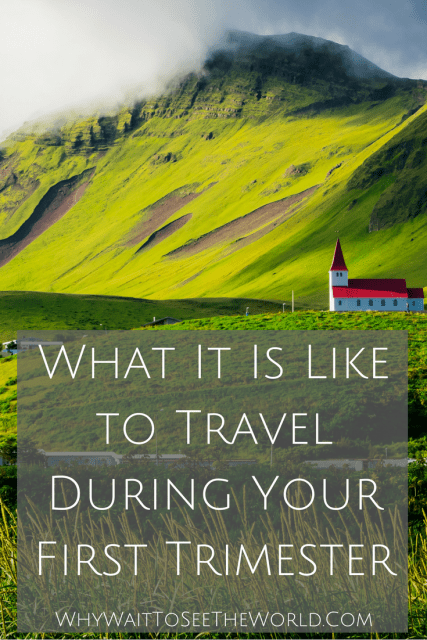