I’ve widely heard the second trimester referred to as the “golden period” of pregnancy. When I rolled into it at 14 weeks I was not convinced. I still felt pretty icky and I started to worry I wouldn’t be able to fully enjoy the three-week babymoon we had planned for Japan.

(Here is the article I wrote about travel during the first trimester, which was… challenging).

Fortunately, things started to get better almost immediately after we left for Japan, and I felt terrific the entire time we were there. Like normal really. I totally understand why people say that travel during second trimester is the best time – you get your old energy back, but you’re not enormous yet. If you’re planning a big trip during your pregnancy, this is definitely the sweet spot to aim for.

I traveled to Japan during the 16-19 weeks of pregnancy, so the first part of the second trimester. I also took a short local babymoon with Mike at 25 weeks pregnant. Things went a lot smoother than the first trimester, but there are some things you should know with travel during second trimester.

(Obligatory every person is different/ your mileage may vary/discuss your plans with your doctor’s preamble).

To be fair, any 8+ hour flight is basically miserable, but pregnancy definitely makes you significantly more uncomfortable. Flying during the second trimester wasn’t nausea inducing but I did feel cramped and gross. It’s really hard to get comfortable in those tiny seats and I had to pee every 5 minutes or so. I didn’t sleep a wink the entire flight and I ugly cried through every movie I tried to watch (thanks Inside Out).

During that time period I was having a lot of weird pregnancy-related sinus headaches and on our descent into Tokyo I developed the most piercing, painful sinus pain behind my right eye. I seriously freaked myself out and thought I was having a brain aneurysm (during our return flight I popped some Sudafed and had no problems).

Our flights to and from Japan could not have been more different… On our flight home, Mike used our miles to upgrade us to business class on ANA. I had never flown business, which was a nice treat and also amazing as a pregnant lady. Decent food, great service and most importantly, fully reclinable seats made the flight almost enjoyable. I felt a million times better and more comfortable, and it was a nice peek at how the “other half” lives. Was a bummer to miss out on the complimentary champagne though.

Tip: Definitely opt for the aisle seat so you can get up and stretch your legs every hour or so when you travel during second trimester. Drink tons of water both the day before and the day of the flight. And bring some of your own snacks so you don’t get too hangry waiting for your disgusting plane food.

Tip: If you are rich, or just really lucky with the miles, shell out for the upgrade, it makes such a difference on a long flight.

Jet Lag will Lay You Out 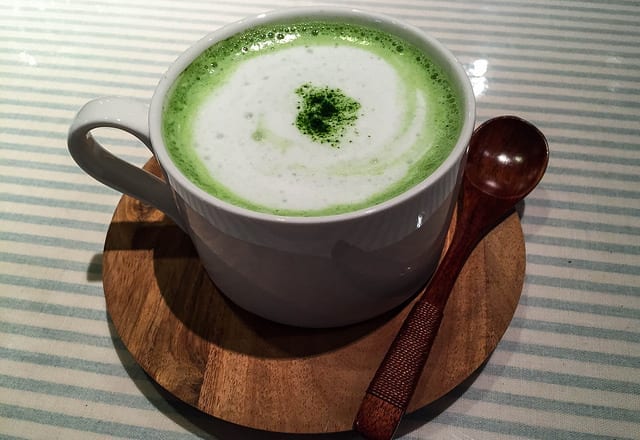 I already knew this from my first trimester travels, but yes, jet lag is even worse when you are pregnant. It’s much harder to rally and power through the lag when there’s a tiny baby sucking out all your life force. Fortunately, I had already planned to take it easy the first few days of our trip and we hung out in Kanazawa, sightseeing at a leisurely (for us anyways) pace.

What I didn’t plan for was how terrible the jetlag would be after we got home. Not sure if the joy of being in Japan counteracted my tiredness, or maybe it was just the fact I was 3 weeks more pregnant when we got back to Seattle. I’ve honestly never been so tired in my entire life. It was more like having the flu than having jetlag. I was essentially useless for three days straight until my body finally started adjusting.  If you travel during second trimester schedule some relaxation time when you get back.

TIP: Water, of course, gallons of it. Caffeine (within reasonable, doctor approved limits) helps a LOT. Most importantly just letting your body rest when it needs it.  Consider bringing a travel pillow along, especially if you are going to Asia. Japan’s rock hard beds did not help with the sleep deprivation one little bit. I took this one which was great. 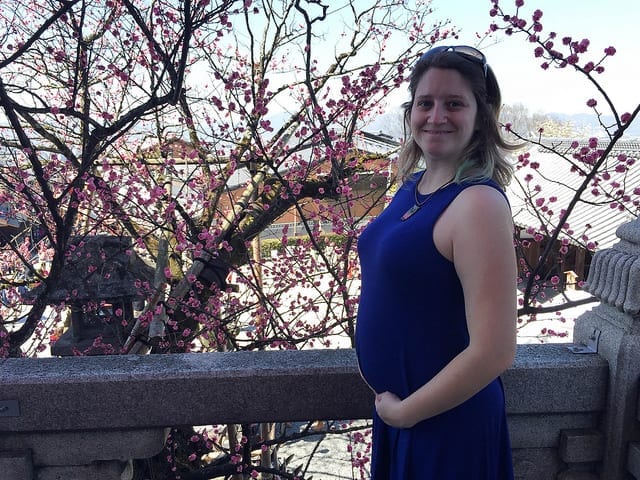 This was by far the best part of travel during second trimester of my pregnancy.

I love my husband so much for so many reasons, but a big one lately is that he doesn’t treat me like I’m made of glass right now. He trusts me to know my limits and during this trip, my limits were pretty dang good. I felt freaking fantastic. As a result, we walked a TON on this trip, just like we do on pretty much all our trips. I’m talking upwards of 20,000 steps a day every day.

That said, it wasn’t exactly like old times. I needed a lot more breaks than I’m used to.Sometimes that meant a quick park on a bench somewhere, sometimes it meant quitting sightseeing early for a cheeky hour of napping. I had to manage my energy and save it for the important stuff.

I also got sore a lot faster, both my feet and my back. This particularly became more of an issue later in the second trimester as the baby got bigger and heavier to carry around.

Tip: Comfy shoes are an absolute must for travel during second trimester. I wore these crocs pretty much everywhere. If you suffer from back pain, switch from a purse to a backpack. It kept things more balanced and caused a lot less pain. Even better, make your partner carry everything whenever possible.

TIP: Water is a pregnant ladies best friend. I always had a bottle on hand and made time to stop for water breaks.

I was so thankful my appetite came back when we were in Japan because the whole point of our trip was to enjoy the many facets of Japanese food. Unlike the first trimester, I felt game to eat anything.  I feasted on all the noodles, the pork katsu and the many many different pastries and ice creams available to me.

Of course, everyone knows that pregnant ladies have to avoid certain foods. Undercooked meat, deli meats, and smoked fish were a few that came up during our trip. In a former life, I ate pretty much everything indiscriminately, so this constant vigilance was a bit of an adjustment.  I didn’t really find too much trouble with this as Japan has tons of variety to choose from. I did start to really miss beer though, my favorite traveling companion after Mike. And I never ever warmed up to the fact that I had to ruin a beautiful steak by ordering it well done.

The big one in Japan was, of course, the sushi. After some research and speaking with my doctor, I had decided ahead of time that I was comfortable with eating sushi as long as it was of good quality and I avoided fish too rich in mercury. This meant I did get to tuck into a couple of really good sashimi dinners, but it also meant skipping out on the bento box sushi and the fatty tuna I wanted so badly.

On a side note, as soon as you arrive in a new country you are probably going to start craving something totally inconvenient when you travel during second trimester. In my case, it was New York style pizza and skim milk.

TIP: Do your research before you go on what you can and can’t eat at your destination. Decide what your limits are ahead of time so you don’t have to make any frustrating game-time decisions.

Miss a Mealtime at your Peril

When a pregnant lady needs to eat, she needs to eat NOW. During the second trimester hunger came on fast and unexpectedly and needed to be dealt with immediately, or else.

One night we were late on our way to dinner only to discover the “non-smoking Izakaya” I had dutifully researched wasn’t non-smoking at all. Super hungry at this point I was unable to control my lizard brain and went into full toddler meltdown mode. Tears streamed down my face while Mike frantically scrambled to find somewhere, anywhere, for us to eat dinner. I knew it was irrational but I could not help it. Once I got some food in me I was perfectly fine.

I’ve never been one to get hangry (that’s really more Mike’s thing), but pregnancy has left me totally unable to control my emotions once my stomach takes over. And I basically never knew when that might be.

Tip: Pack snacks every day (granola bars are a safe bet). Make your sightseeing plans while staying cognizant of meal times. Do not, under any circumstances, skip a meal when you travel during second trimester.

Unlike in your first trimester, you may start looking visibly pregnant in your second. My stomach started popping almost as soon as we landed and I went overnight from looking kinda bloated to a bonafide pregnant lady. This is kind of fun, but it also means everyone who sees you immediately feels like they know your business. Depending on where you travel during second trimester this can mean quite a bit more unwanted attention, unsolicited advice and maybe belly touching.

This can mean special treatment but also weird restrictions you might not otherwise think of. In Asia, they believe that pregnant women should always be kept warm, and may discourage you from ordering ice cream or other cold dishes.

Another cultural norm that slayed me in Japan: smoking. Smoking was allowed all sorts of places that it isn’t in the US, including many restaurants and virtually all izakayas and yakitori joints. This would have been merely an annoyance if I wasn’t pregnant, but while I’m willing to expose my baby to plenty of uncooked salmon, I’m not willing to let it take up smoking at 17 weeks in utero.  This caused quite a few issues when finding a spot to eat.

Tip: Research before you go so you know what to expect. You may want to pack baggier than normal clothes, both to accommodate your rapidly growing body and to conceal your pregnancy if you start to feel uncomfortable. 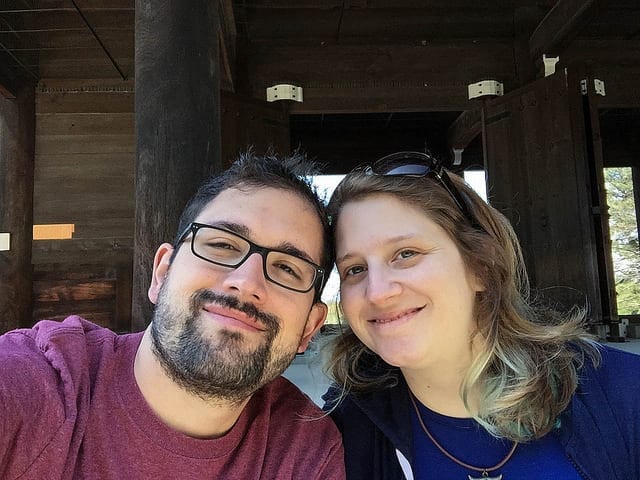 I tend to agree with everyone else who says the second trimester is the best time to travel, particularly the first half of the second trimester. While it wasn’t exactly like traveling while not-pregnant, it was mostly very enjoyable and stress-free.

Despite the long flight, despite the mealtime meltdowns and the jetlag, this trip was so so worth it. It was priceless to spend so much time with Mike, traveling in a way that we may not get the chance to do for quite a while (I’m sure traveling with a kid will be great but it’s definitely different). We made priceless memories, ate fancy dinners and really freaking enjoyed ourselves. We picked out artwork for the baby’s room and took many many pictures so someday we can prove to her she was there. This trip was a massive splurge for us but I think we will always remember it as special!

Thinking About Traveling While Pregnant?  Check Out What Travel is Like During First Trimester and Third Trimester Here 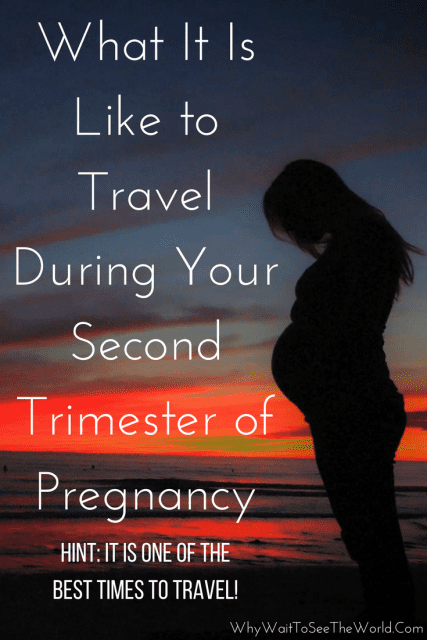