I wasn’t supposed to be in Barcelona alone. Everything I planned: the large airbnb with the balcony overlooking Santa Maria del Mar, the tickets to the Sagrada Familia, the cute little restaurants was with a romantic pre-TBEX getaway in mind.

And that was the plan right up until the night before departure when Mike looked at his passport and realized it had expired. Six weeks earlier.

I will spare you the domestic drama that ensued. Marriage I have come to learn, is all about these, well fuck-ups, for lack of a better word. Mike forgave me when I screwed up our taxes last year so I had to forgive him for forgetting to renew his passport. Besides, he felt terrible. Missing our trip to Europe would be far worse punishment than anything I could dream up.

The next morning with very little sleep and a lot of stress, I set out for Barcelona alone. Mike started scrambling to get an emergency passport renewal so he could hopefully meet me later on. We didn’t even know if that was possible, so I was facing somewhere between 3 days and 3 weeks in Europe alone.

I wasn’t happy. It wasn’t that I was afraid to go it alone (my love of solo travel is well documented), but I wasn’t mentally prepared for this at all. I had been planning a trip for two, not a solo jaunt. It threw me off kilter and made me question the whole trip.

Here is how I eventually made out:

I think it’s fair to say Barcelona didn’t make much of an impression on me the first time around. In fact, I didn’t even write about it when we visited in 2012. We were there for so little time, at the very end of a long trip, and I was really just ready to go home. I remember we stayed in a neat hostel and walked La Rambla but not much else.

In spite of my rusty Spanish skills and severe jetlag I successfully navigated my way from the airport to the cute AirBNB in the hip Born neighborhood. John, the unnervingly handsome landlord, didn’t comment on my surprise single-ness as he showed me the huge apartment I’d rented. Enormous, this place could sleep three couples. On the table was a chilled bottle of cava and two champagne flutes. Just for me.

Rather than sitting around the cavernous apartment feeling sorry for myself, I decided to meet up with some bloggers I’d connected with on Facebook. We didn’t really know each other, but they were happy to let me spend the afternoon with them drinking vermouth, walking around Poblenou and eating paella. It was a more local side of Barcelona that I hadn’t spotted on my first whirlwind trip through the city. 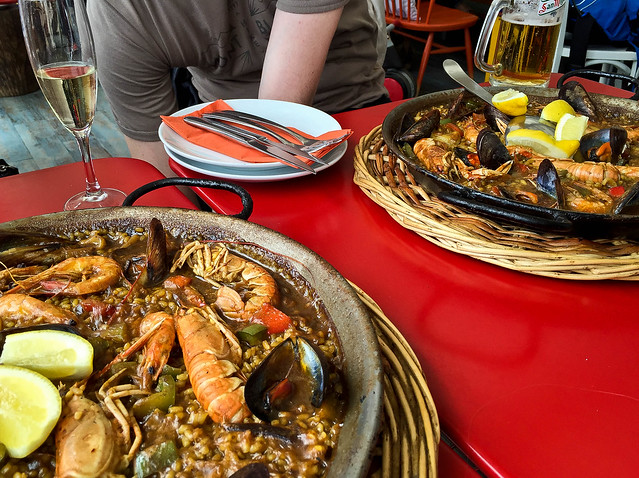 By the end of that first evening watching an evening thunderstorm rain down on the cobblestones below, I could tell I was starting to fall for this place. Then again, I’d been awake for the better part of 48 hours, and maybe I wasn’t thinking too straight, so I decided to sleep on it. 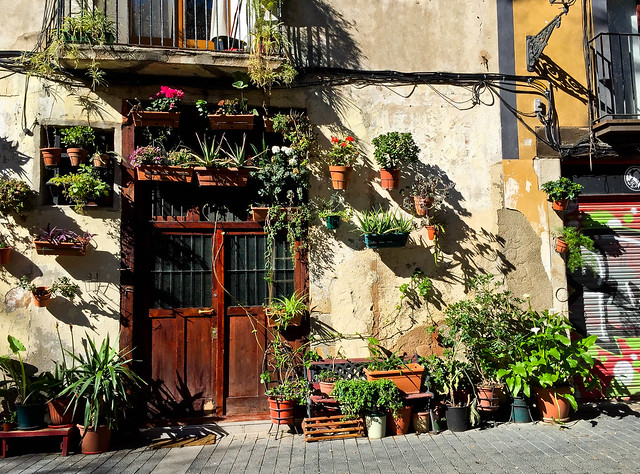 Thanks to jetlag I was up bright and bushy tailed at 6 AM. This never happens in real life so I decided to embrace it and do some sightseeing. I’d forgotten of course that Barcelona itself doesn’t wake up until at least 10 AM, and the streets were basically deserted.

Without Mike around, I’m able to engage in my favorite new-city activity: aimless wandering. Mike has no patience for this: he needs a destination, or at least a goal, but I am happy to get lost in Born’s winding streets with their little shops and cool street art. I picked up a pasty for breakfast and a jamon sandwich for lunch and happily exhausted my feet wandering around the Mercat de Santa Caterina, the Parc de la Ciutadella and more. It was lovely, if a little lonely. 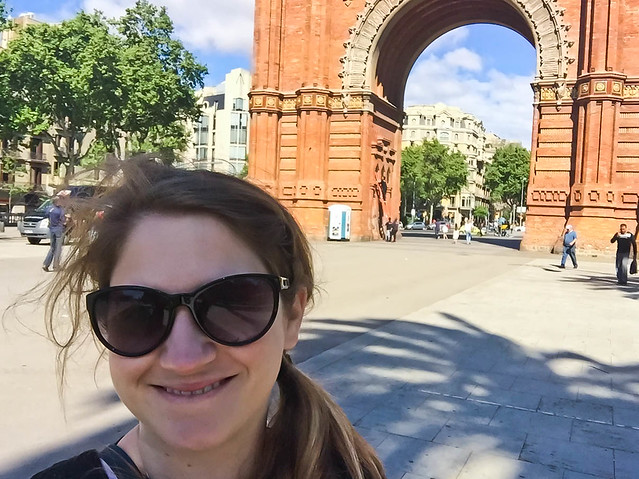 I’m wasn’t quite up for dining alone so I bought myself a supermarket meal of fresh bread, cheese and beans with pesto. Mike is the one with excellent Spanish skills and I cursed him a little for cheating me out of a yummy and romantic meal somewhere fancy. 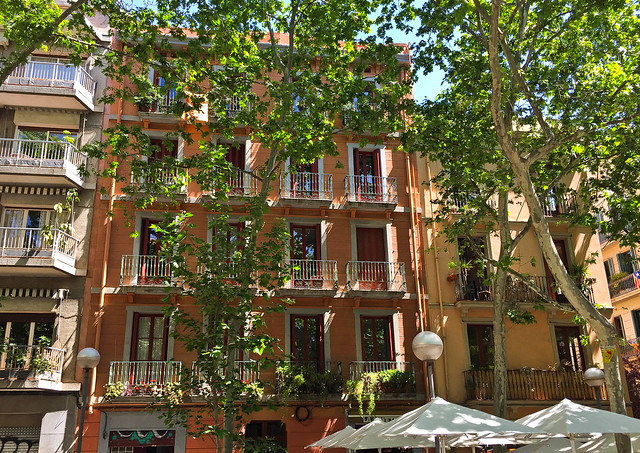 I did my aimless wandering yesterday and today I am chock full of plans. First up: a food tour with Devour Barcelona (full review of that coming up soon, but needless to say: it involved a lot of good eats). Group tours are nice when you’re alone because you can make some insta-friends- especially if you tell them your husband’s tale of passport-woe.

After the tour I headed across town to the towering Sagrada Familia. As recommended I had bought two tickets in advance, and I managed to convince a blogger friend Anne from Part Time Traveler to take Mike’s spot. Anne studied abroad in Barcelona so she made a nice tour guide for Gaudi’s masterpiece. The church itself is lovely and strange and so colorful in the afternoon light. Unfortunately the good camera was in Mike’s luggage (oops) so I had to make due with iPhone photography, which almost feels sacrilegious. 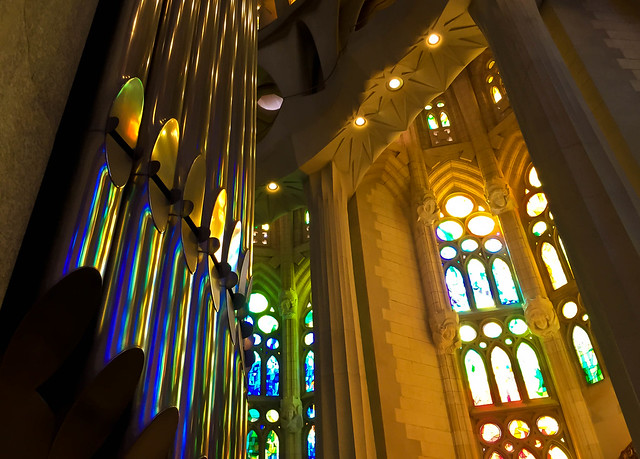 Afterwards we met up with Barcelona local Jenny from A Thing for Words and headed back to Born for a long night of tapa eating and cava drinking. Anne took us to her favorite undergrad haunt: El Xampanyet, where you can order a massive bottle of house cava for less than the cost of an Uber ride. We also indulge in pesto topped grilled calimari, chickpeas with butifarra and morcilla (that’s white and black sausage) and of course endless olives. It’s simple and brilliant and one of my most memorable meals in a long long time

Yup, consider me won over. I definitely love Barcelona.

Time to head to Lloret and get ready for TBEX- and meet up with Mike who has managed to obtain a 1-day passport renewal and is currently somewhere in the air between Seattle and Barcelona. I’ll be glad to see him and spend the next few weeks traveling through Portugal and England, but truthfully, I really did enjoy myself in Barcelona. With only a couple days to wander, explore and socialize I discovered everything I missed the first time around. Could I have done the same with Mike? Of course, but it felt pretty great to do it alone too.

It’s lucky for me that I’m an experienced solo traveler already, but also a testament to the importance of practicing solo travel, even if you’re in a committed relationship. Learn the skills now. You never know when you might have to go it alone, and you might as well learn to enjoy it.

Have you ever taken an unexpected solo trip?

19 thoughts on “Unexpectedly Solo in Barcelona”