While traveling America this summer, I got the chance to taste dozens of dishes that were unique to the area I was visiting. I’ve already shared my favorite foods from the East Coast and a few of the foods that are so important to a region there’s a battle of which dish is better. This time around, I’m exploring one of America’s most iconic foods: barbeque. Depending on which part of the country you’re in will determine what you’re actually eating when you walk into a barbeque joint.

Texas barbeque is all about the beef. Different cuts are often smoked over a variety of charcoals or wood chips for hours giving many parts of the state an intoxicating aroma. Since this smoking process is so in depth, often the meat is served dry, without a sauce covering it. Some feel quite strongly that smothering meat in sauce takes away from the natural, robust flavors of the meat and the smoke. But when there is sauce, it is generally a tomato based style. You can find a variety of beef, but the most popular choice in the Lonestar state is the brisket, which is a cut of meat from the lower chest or breast.

Texans may love their beef, but in the Carolinas, it’s all about pork. Pulled, shredded, chopped, and even sliced, pork is served on a bun or white bread with sauce and coleslaw or simply on its own. In North Carolina, they use their resources, and often use a “Whole Hog” style of barbeque where the entire pig is used. What is unique out South Carolina is their barbeque sauce, often referred to as Carolina Gold. Unlike the other reddish barbeque sauces that can consist has a tomato based, the Carolina Gold sauce is a mustard base. It’s believed that this twist on the classic barbeque sauce was inspired by German immigrants who called South Carolina home. Besides yellow mustard, the sauce can consist of vinegar and brown sugar.

Possibly since the city is positioned somewhere between the Carolinas and Texas, there is a blend of different styles of barbeque serving both pork and beef. The star of the show in Memphis is the ribs. Ribs are smoked over low heat for hours making them tender and flavorful. You can order your ribs wet or dry. Wet is smothered in barbeque sauce while dry is no sauce. But just because there isn’t any sauce doesn’t mean there isn’t a punch of taste. A dry rub is generously applied to meat before it’s smoked, and the rub can consist of strong spices like paprika, cayenne pepper, black pepper, onion powder, garlic powder, salt, brown sugar, white pepper, oregano, chili powder, and more. 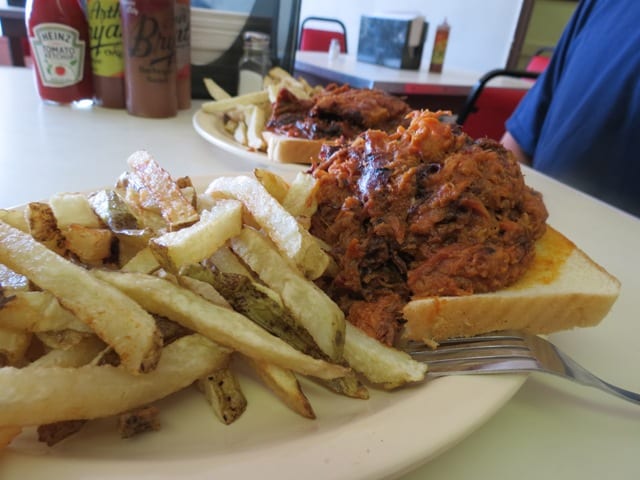 Kansas City is unique because unlike the other regions which are mainly known for the type of meat used, this bustling city is known for the sauce. Unlike the other regions, Kansas City uses a sweet sauce. It’s known for being ultra thick and tangy and often containing a tomato base with molasses. The sauce goes over everything, including the one of the most popular barbeque dishes in Kansas City, the burnt ends, which are literally the slightly burnt crispy ends of the meat.