I’ve had a lot of cool adventures in my life, but nothing quite compares with the energy, the sheer joy, of watching the US win the World Cup in Vancouver last week. 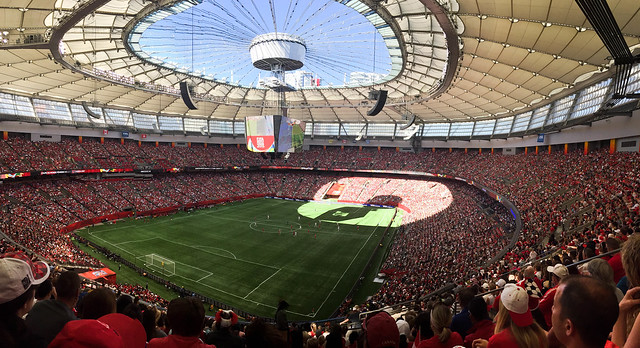 First though, some background:

We bought our tickets almost a year ago, on a whim, once we realized that we would be living in Seattle, just a few hours south of Canada, which was hosting the 2015 FIFA Women’s World Cup. I wrote a little bit about our reasoning here.

The World Cup is kind of a funny thing to buy tickets for. Because of the way the brackets work, when you buy your tickets you actually have no idea what teams you will get to see play. You simply buy a package and hope that your team will end up in the right spot.

In our case ended up with two round of 16 games and one quarter final game all during one week in June. We also paid extra for tickets to the final, figuring that if the US made it we could make a second trip up to Vancouver to see the game.

The World Cup is so Fun! 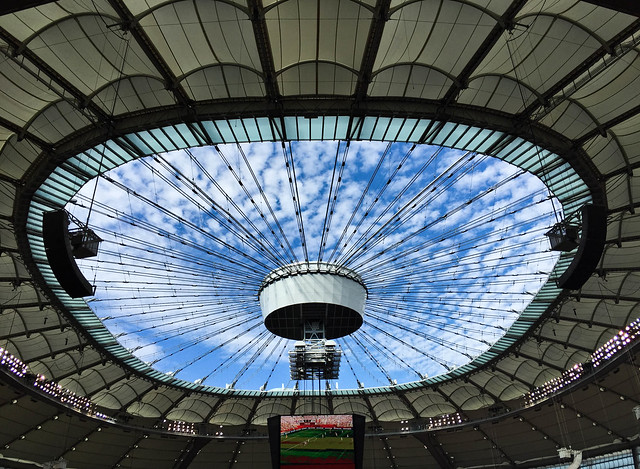 Our World Cup week was pretty great- we stayed at a great apartment (thanks to my re-curring partner Flipkey), ate tons of brilliant food and watched an absolutely incredible amount of soccer. Our first game was Canada vs. Switzerland, and it was beyond fun to cheer for the home team inside of packed BC Place, which by the way, it an absolutely gorgeous stadium.

Watching soccer on tv is pretty fun, but watching it in personal, especially a big game, is insane. There is so much energy with the crowd cheering changing and loudly reacting to every play and call. The crowd was pretty diverse, and I was particularly psyched to see so many little girls (and boys) wearing the jerseys for their favorite players.

We actually got to see Canada twice! Once in victory, and then once in defeat, shut down by England. We also caught a Japan vs. Netherlands match, where the Japanese danced circles around the girls in orange. They played in complete synch, like each player was an extension of the other. These ladies are formidable, I thought to myself, no wonder they beat the US and won the tournament four years ago. 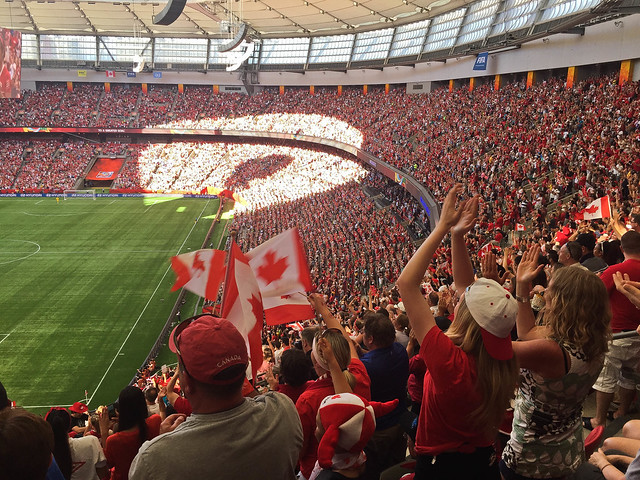 All of that was great fun, but you’ll notice something was missing. There were no US Team games in Vancouver while we were there. The only US action we saw was on TV at the sports bar.

We returned to Seattle happy with our trip, but bummed we hadn’t seen our own team play.

But all was not lost! I watched the US crush Germany in the Semi-Finals from my couch in Seattle, and immediately went to work making plans for a July 5th return to Vancouver. Those tickets we’d bought on a hunch had paid off: not only would we get to watch the US Women’s Team Play, it would be in the final! Against Japan of course, my favorite team from the previous games.

We rented a car for the day (note: don’t try to go to Vancouver for the day, you will spend more time sitting in the car waiting to cross the border then you will in the city).

Things were pretty different on this day then they had been just a week before when we left town. For one, the typically sparkling West Canada air had turned to smoke and ash. Massive forest fires were blazing on Vancouver Island, blowing a thick coating of smoke over the city. The smell, and the burn in my lungs, reminded me of our time living in China. How on earth could the players breathe, let alone run for 90 minutes?

The bad air almost didn’t matter though. The streets and the stadium were packed floor to ceiling with joyous fans. There were a few Japan supporters and a handful of clear Canadians who were just along for the ride, but the crowd was predominantly US supporters, decked out in red, white and blue

Everyone knows how the game went, the stellar performances by Carli Lloyd, Hope Solo and Lauren Holliday. The way the US absolutely crushed Japan in the first 20 minutes of the game. The retiring captains Abby Wambach and Christie Rampone coming out to play the last few minutes of the game. 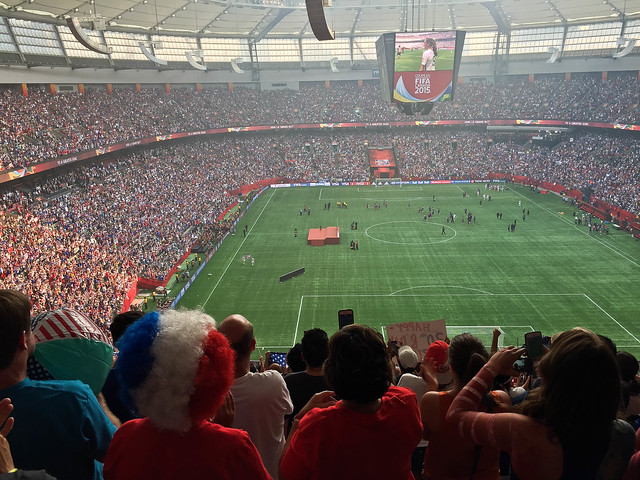 The noise at BC Place when we won was unimaginable. 50,000 people cheering at the top of their lungs. Even more incredible is what happened on the field. The hugging and the crying of course, Abby Wambach pulling in her wife for a kiss (I was a little worried she was going to fall out of the stands!) before taking a victory lap around the field wearing an American flag as a cape. The crowd booing the FIFA officials, who looked extremely uncomfortable to be there. Cheering and chanting for basically everyone else.

There was that unmistakable, euphoric feeling of being a part of history.

Long after people started streaming out of the stadium we lingered. We didn’t want to leave, to give up on the jubilant celebration. Neither did most of the players. Their kids started to stream on the field for hugs and photos. Several of the players started making snow angels in the fields of glitter that coated the field. All of us were happy to be here together, and we milked every moment. 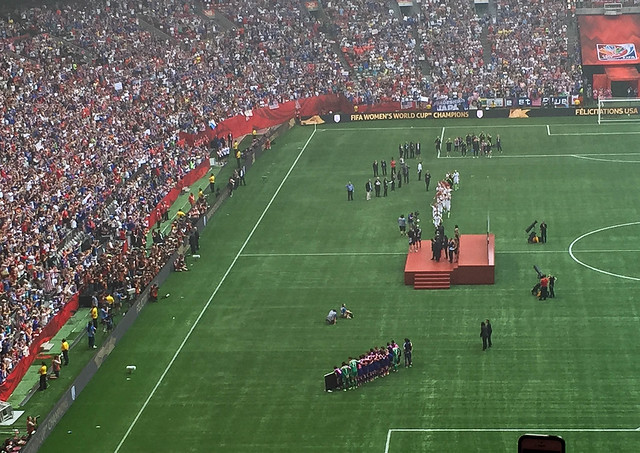 In my last post about the World Cup, I wrote about watching Brandi Chastain make that final penalty kick in 1999. Although I wasn’t a soccer fan then, that moment stuck with me. Watching your team win is always a great thing, but watching these women be honored as heroes, regardless of their gender, was extremely moving.

Then I went home, booked some tickets to see Seattle Reign and started planning how to get to Japan for 2019. 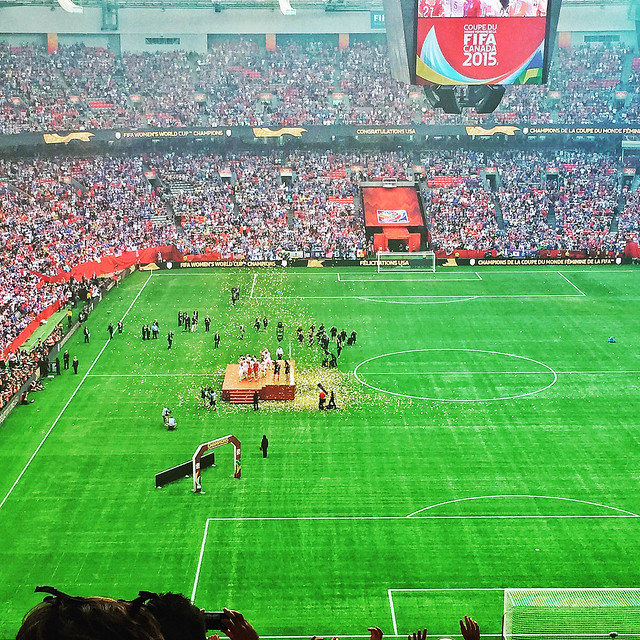