Last Monday Michael and I went to a coworking event with a group. It’s a pretty neat concept: freelancers, programmers, start-up entrepreneurs all getting together a couple of evenings a month to meet and work together on different projects.

It was our first time, and we felt kind of like the new kids in school, so when a friendly-looking guy started chatting with us about our businesses, we were psyched. As we talked about living and working around the world he got more and more excited. We’re on exactly the same page, he told us. He just had to tell us about his business!

He settled down beside us and flipped open his Samsung tablet. Thinking we were going to hear about his start-up or website or whatever, we leaned in. He started in on a slideshow featuring generic travel photos under headings like BEACHES, NIGHTLIFE, ADVENTURE.

Well, whatever he’s doing, it sounds pretty cliché, I thought to myself. He kept going telling us about this online travel club called WorldVentures, where users can buy discounted travel packages for super cheap if they just pay a $199 fee + $54.95 a month (what a deal!). Then he told us the real money was in becoming an associate and recruiting others to join the program.

It wasn’t until he showed us the pay structure, which looked exactly like a pyramid, that I realized what was going on. It looked like this guy was actually trying to recruit us into a pyramid scheme!

“I’m going to stop you right now,” Mike said. The guy looked up from his endless slideshow where he was explaining all the free trips and cars you can earn, just by working for yourself! “We’re never going to be interested in this.”

“I thought you guys said you were entrepreneurs,” the guy mumbled before shuffling off dejectedly. Mike and I looked at each other in disbelief. Did that really just happen?

I didn’t know people even still DID these things. I associate these sort of companies (like Amway) with some bygone era. Clearly they do since this young (probably late twenty-something) dude was trolling coworking meetups for sign-ups. So, of course, I started digging.

What I learned really surprised me. This is a multi-million dollar company and it is growing fast. When I asked around on Facebook many people seemed to know at least one or two people involved.

With a few hours of research, I was able to get the scoop on WorldVentures and I was pretty disturbed by what I learned:

On it’s most shallow surface a program like WorldVentures sounds incredibly appealing. Trapped in a job you hate? Longing to see the world? Join us and become your own boss! Work from anywhere! Earn fabulous rewards like cars and vacations!

“Make a living while living,” is the catchphrase. And who wouldn’t want that? In fact, maybe readers of travel blogs are particularly susceptible to such a line. Isn’t that was a lot of websites promise? Isn’t that the idea behind the 4-hour workweek? Isn’t that basically what I claim to do, more or less (possibly why the coworking dude thought I seemed like a perfect target)?

WorldVentures mentions “dream trips” and their promotional materials feature sales associates in tropical places holding signs that say “You should be here.” They entice people with the promise of an easy, glamorous way to make a living, and you can’t say it’s not appealing. In a world where becoming a location independent entrepreneur is the goal of many, this seems like the fast track to easy living.

Hidden only slightly below the glossy promises is the fact that WorldVentures is at heart a multi-level marketing (MLM) network. My initial impression was slightly off: it is NOT a pyramid scheme because the company sells actual products (vacations), which is enough to keep them on the correct side of the law.

The idea behind MLM is that you make money not just through your own sales work, but by recruiting other salespeople and making a cut of any sales that they make. Recruit enough people below you and you can just relax and watch the money roll in.

To become a sales rep you pay a $99.95 sign-up fee plus 10.99 a month. You then go to work recruiting others to sign up below you. Honestly, the payout scheme is so complicated I started tuning out, but to quote this very interesting article in the Observer:

“WorldVentures has a virtually inscrutable payout schedule comprising seven ranks and two pyramid-shaped hierarchies. The first pyramid is called the “lineage.” You sit at the top and everyone you’ve personally recruited is added directly below you, and everyone they’ve recruited is below them, and so on. Lineage is factored into rank, which is factored into compensation. The second pyramid is the “binary organization.” Here the pyramid spreads out by twos—the top spot sits directly above a left and a right spot, each of which sits above its own pairs, and so on. You can then earn bonuses based on sales made by the binary organization, which is comprised of the reps you recruit, and the reps they recruit.”

Right… so if you manage to master that complicated pyramid, you could potentially make a lot of money. You may not though, and here’s why:

Many of you probably already know the issues with MLMs, but here is the lowdown, straight from Wikipedia:

“Companies that use MLM models for compensation have been a frequent subject of criticism and lawsuits. Criticism has focused on their similarity to illegal pyramid schemes, price fixing of products, high initial entry costs (for marketing kit and first products), emphasis on recruitment of others over actual sales, encouraging if not requiring members to purchase and use the company’s products, exploitation of personal relationships as both sales and recruiting targets, complex and sometimes exaggerated compensation schemes, the company making major money off its training events and materials, and cult-like techniques which some groups use to enhance their members’ enthusiasm and devotion.”

Some people do make lots of money off of MLM, but many people do not. You see there is always a catch. In the case of WorldVentures the catch is:

“MLM is a grind. When reps fail to make money, they’re taught to blame themselves. Reps are also heavily encouraged to spend their own money on WorldVentures’ myriad training events, which can range from $29 to hundreds of dollars to attend. WorldVentures has a tendency to sue its former employees who move to competing MLMs or speak negatively about the company, squashing public dissent;”

If you need further proof this is a bad idea check out this guys first person account of his experiences (since removed but preserved via Wayback Machine):

“Not only you have to pay for Dreamtrips membership for trips which are priced the same or even higher than if you booked the exact same trip online or better through your travel agent who would take care of your flights too and treat you like a good valued customer, but you are bombarded every month with trainings (costing from 99US to 500 US), Marketing Tools that should be offered for free (ie 30 US per month to use a mailing system) and many more additional costs that WorldVentures uses to extract more money out of its reps and members.”

Someone is making a heck of a lot of money out of WorldVentures, but it probably won’t be you.

What I actually found most disturbing when looking into the company is the almost zombie-like devotion it cultivates among salespeople. If you look at the comments on any of the above-linked articles you will see dozens and dozens of people staunchly defending the company. These comments often spout back the company lines word for word.

Additionally, when you search for terms like “is worldVenture a scam?” or “worldVenture pyramid scheme” you will find tons of enthusiastic users expounding on why it’s definitely not a scam.

That’s probably enough to appease a lot of people thinking about participating. It’s only those who dig deeper who will find out that WorldVentures has been the subject of several lawsuits and that the travel deals it offers aren’t even that great.

Nobody likes to hear this, but anyone trying to lure you in with the promise of fast easy money is pulling a fast one on you. Particularly if you have to lay out money at the beginning to get involved. You are not going to get rich off of WorldVentures, but if you sign up WorldVentures is going to continue to get quite rich off of you.

So there’s no magical way to travel around the world and get rich while doing it. Trust me, I would know.

That doesn’t mean you can’t see the world though, for cheap too. Readers of this blog already know there are plenty of ways to travel around the world for far less money than you think. And yes, they require some of that less-fun stuff like working hard, and saving, but the end result is way more satisfying and sustainable.

The scariest thing for me is that WorldVentures appears to actually be growing, which means a lot of people are being enticed into paying good money and effort down a rabbit hole when there are far more productive ways to realize your travel dreams. Don’t be fooled, don’t go for the “easy money.” I promise you can do better.

Have you heard of WorldVentures?

9/27/13 UPDATE: Since publishing two months ago this blog post has become one of my most commented on posts, with passionate arguments from both pro and anti-WorldVenture perspectives. I welcome your insights, however, due to the high volume and limited hours in the day, I am not going to be responding to any more comments on this post. I will continue to moderate and delete abusive comments but I will not be engaging. Thank you!

10/10/13 UPDATE: After reading through a slew of comments from people who clearly didn’t read this article, and are mainly interested in promoting their own agenda and arguing with each other, I’ve made the decision to close the comments on this post. I stand behind what I’ve written, but I’m a professional, and it’s not a good use of my time to monitor and deal with these comments. Pretty much every point of view is already represented below, so I suggest you read on for alternate opinions.

You may not appreciate this decision, but it’s my blog, my rules. My post on Worldventures is just a tiny fraction of what this website is about. Contrary to some of the accusations below I make no money directly off this article and have no personal vendetta against WorldVentures. My intentions are solely to provide a critique of widely available information.

I’m a self-employed travel entrepreneur who lives and travels all over the world. If you’d like to learn more about how I do this (without the help of an MLM company), please check out my about page. 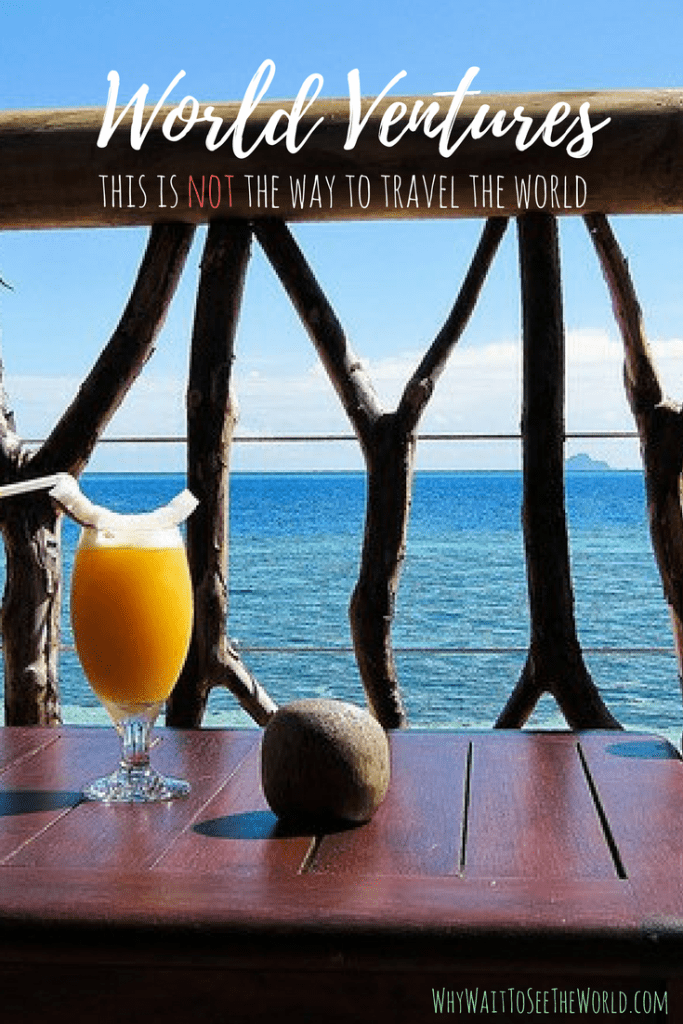 236 thoughts on “WorldVentures: This is NOT the Way to Travel the World”