I never feel more Canadian than when I’m traveling. When I’m at home, I’m Jess; but as soon as I leave Canada, I become Jess the Canadian. The more I travel the more I realize that whenever I visit another country, I’m an ambassador for Canada whether I like it or not.

When I first started traveling, I realized that a lot of the people I met had questions about Canada, and embarrassingly, I couldn’t always answer them – particularly when those questions were about Canadian food.

I remember having one Couchsurfing host who kept talking enthusiastically about how many of his past guests had cooked him traditional dishes from their home countries as a way to thank him for his hospitality. I was happy to cook for him, but I felt like I was letting him down when I admitted that whatever I made wasn’t going to be a uniquely Canadian dish.

When my boyfriend and I worked in Japan, we’d sometimes bring leftovers to the office after cooking a meal at home. Our co-workers would look inquisitively at whatever we had brought, asking if it was a Canadian dish. Much to their disappointment the answer was again, always no.

A little research revealed that, not surprisingly, I’m far from the only Canadian who has difficulty explaining exactly what our food is all about. Most people seem to agree that there’s no simple definition of Canadian cuisine, but here’s what I do know.

The Most Distinct Dishes are French Canadian 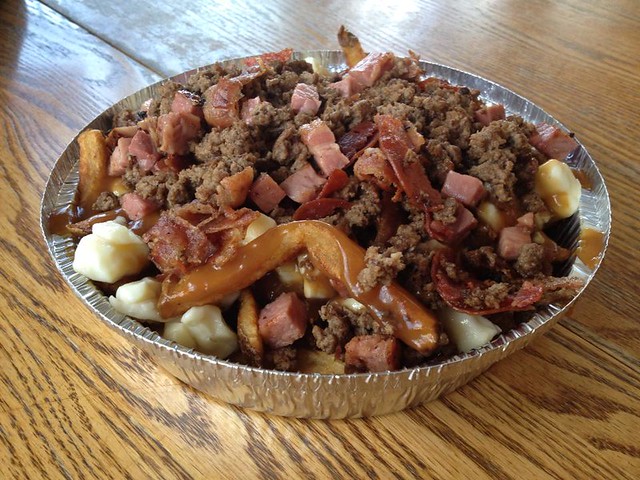 The list of dishes that are truly unique to Canada is quite short, but almost all of those dishes have their origins in Quebec, the country’s main French-speaking province. As you might expect, these dishes draw from the cuisine of France, along with influences from First Nations culture. Most of Canada’s early French settlers were fur traders and Quebecois cuisine is hearty, high-fat food that was designed to keep these settlers warm and satiated during Canada’s long, harsh winters.

Poutine, easily one of Canada’s best-known dishes, exemplifies Quebec’s rich, comforting cuisine with its cheese curds and gravy. There’s also tourtière, a meat pie with a flakey crust which is filled with pork, fowl, veal, or beef. The dish is particularly popular during Christmas and New Year’s celebrations, and virtually every family and restaurant in Quebec seasons it with a different combination of spices. Pâté chinois is another much-loved dish similar to Shepherd’s Pie, but made with layers of beef, creamed corn, and mashed potatoes.

On the dessert front, there’s tarte au sucre (sugar pie), which is a single-crust pie filled with brown sugar, flours, eggs, cream, and vanilla; as well as pouding chômeur (poor man’s pudding cake), made with layers of white cake batter topped with hot syrup or caramel.

It’s Big on Meats and Seafood

When I check out restaurants that describe their cuisine as Canadian, the menu almost always emphasizes meats and seafood. They can be prepared and served pretty much any way imaginable, but their use in cooking can be traced all the way back to Canada’s First Nations peoples and earliest settlers.

Game meat is popular, particularly in Northern Canada, including venison, caribou, rabbit, boar, and bison. Alberta is home to one of the largest cattle herds on the continent, and the province is well-known for its juicy AAA grade beef.

British Columbia is famous for its Pacific Salmon, and one of the species, Coho, is actually the symbol for some of the province’s First Nations communities. B.C. is also known for its wild spot prawns, which have a sweet flavor and firm texture. Nova Scotia is the place to go for lobster, while Prince Edward Island is famous its cultured mussels, which are grown in mesh stockings suspended in the water to produce a sweeter, tenderer consistency.

There are Unusual Twists on Dishes from Other Countries

One of the most obvious reasons why Canada’s cuisine is hard to define is because our country is so multicultural. Canada is often described as a land of immigrants, and therefore at its core, our cuisine is a mishmash of the cuisines of different countries from around the world. The result of all these cultures intermingling is some unique Canadian variations on dishes from other countries.

One of the most famous examples is the Nova Scotia donair, which is inspired by the Turkish doner kebab. It typically consists of spiced ground beef topped with a sweet sauce, garlic powder, raw onion, fresh tomatoes, and served in a flatbread. There’s also sushi pizza, a fried rice cake topped with raw fish, roe, and spicy mayo; as well as the East Indian roti, a variation of West Indian stuffed roti made with South Asian bread and different curries as the filling. Some food purists might despise these and other hybrid dishes as inauthentic, and while they may not stay true to the cuisine of their countries of origin, they’re distinctly Canadian in their own way.

9 thoughts on “An Introduction to Canadian Cuisine”