It’s almost impossible for me to believe that my baby turned 1 last week. It seems like just yesterday I was super pregnant and writing my kiss off maternity leave post. Then Marcella came crashing into my life and things have never been totally the same.

Before I gave birth, I had a lot of fears about what having a baby would mean for my career, life and travel ambitions. I am pretty relieved to find that a year later and I’m still the same me. I still love to write (and thanks to a lot of compromise with Mike I still have a good amount of time to do it), and, while I haven’t had the most exciting year travel-wise, all that stuff is coming back too.

Marcella has been on a dozen flights in her first year. She’s been back and forth across the country three times (with a fourth trip coming up next month). She got her first foreign passport stamp: Colombia. In fact, she already has TWO passports, and we’ll be testing out that Italian one in just a couple months. She’s not as well traveled as some babies we know, but she does alright.

The answer to the title question is of course: yes! Assuming you want to. I learned early on that travel would never be quite the same, but it’s been enjoyable all the same.

Here is the good, the bad, and the ugly:

Schedules Above All Else 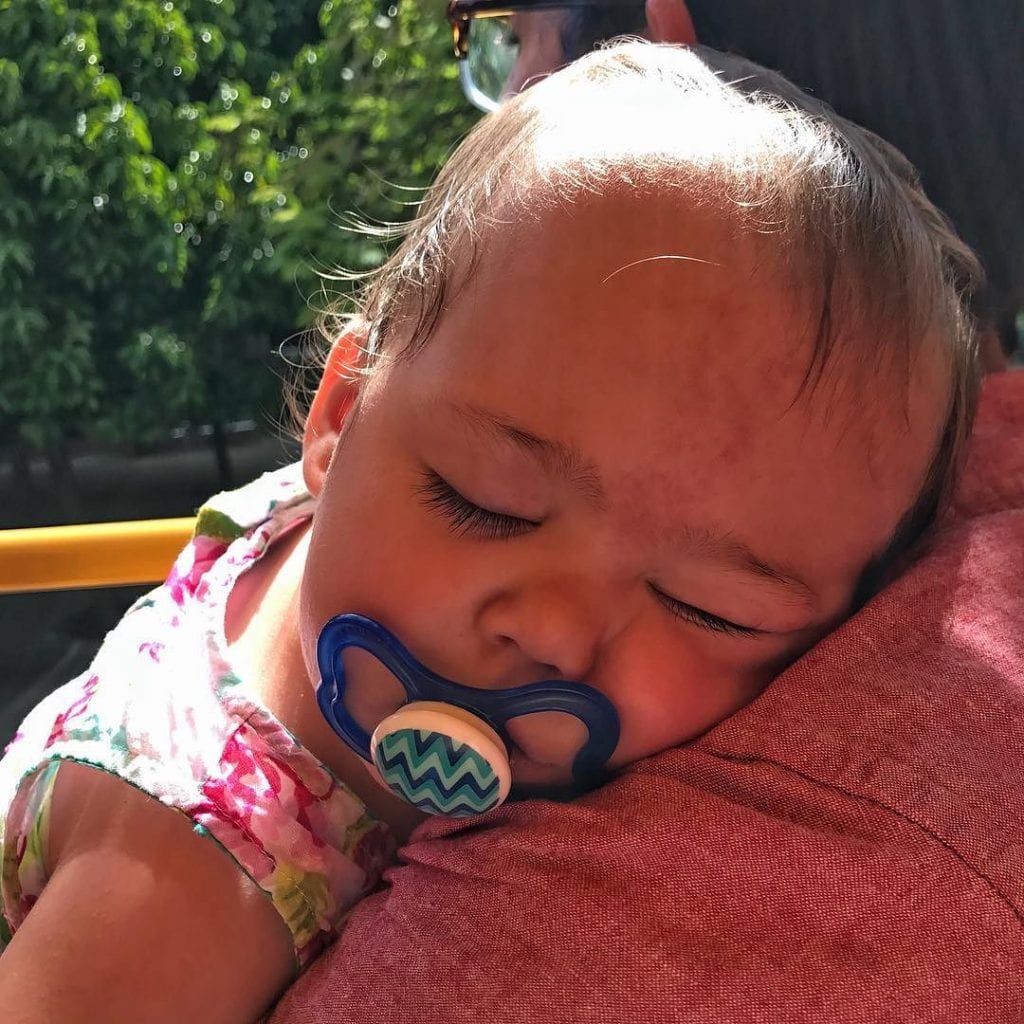 As a traveler, I’ve always thrived on inconsistency. Waking up in a new bed, 8 hour bus rides and strange meals cobbled together on the go were my bread and butter. Babies however, hate this stuff.

We learned fairly on that if we want our kid to sleep at night (And oh god we really, really do want that), we need to keep some semblance of a regular schedule. At our house baby bedtime is a strict 7 pm and two naps a day are the rule. Which means we have to find a way to reproduce this on the road, even if it’s kind of a buzzkill. This means mandatory afternoon quiet hour, take-out instead of eating dinner at the hottest restaurant and lots of stroller naps. It also means a backpack full of snacks to stave off hangry babies (and husbands, if we’re being honest).

It also means suffering the repercussions when the schedule inevitably gets blown to hell. Like a wide-eyed baby sobbing while you wait to board a delayed middle of the night flight. These things always suck, but they suck way more when you can’t explain to the sleepy kid what’s going on.

Flights are Scary but Usually Doable 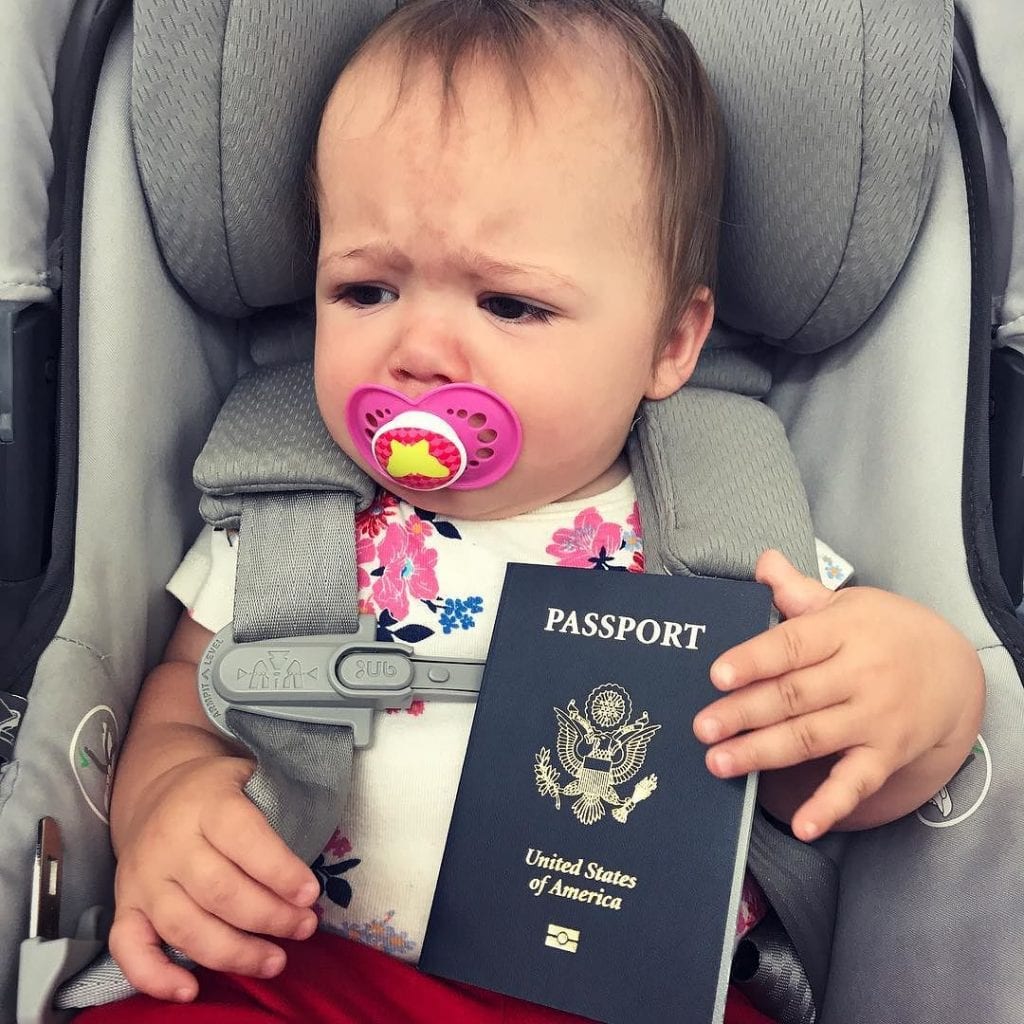 Flying with your infant is one of the scariest parts of traveling as a new parent. I think it’s because babies are super unpredictable. Being trapped in a tiny, confined, space with a bunch of cranky strangers isn’t when you want to find out what misery they are truly capable of.  Also because I’ve heard enough people complaining about sitting next to a kid on planes to be truly terrified of my fellow passengers judgement.

That said, the actual act of flying hasn’t been nearly as awful as I might have imagined (yet- I guess there is still time for my baby to morph into a gila monster). It’s not necessarily enjoyable to keep a wiggly kid entertained for hours on end, and  it gets harder the older, bigger, and more active they get. But it helps to plan ahead and bring lots of toys and snacks. The white noise from the plane helps them nap. And people are much nicer than I imagined. One guy gave us free drink coupons, another time an Indian woman who spoke no English offered to hold Marcella while I used the bathroom.

It Can Be Physically Exhausting

Babies have SO MUCH stuff. Even if you’re traveling light you still need to carry diapers and wipes and snacks and a spare set of clothing. You might need to bring along a heavy   pack and play for them to sleep in (In retrospect, I wish I’d invested in a lightweight travel crib like this one.). Then there are bottles, burp clothes, a sound machine, maybe a breast pump, god knows what else. Oh and a car seat most likely. Babies are very unhelpful and don’t carry anything themselves. Freeloaders.

Then you have to carry around the baby itself. Either in a stroller- another thing you’ll be lifting around, or a baby carrier. Or if your kid is like mine and throws a hissy fit about the stroller you have to carry her in your arms so she can see EVERYTHING. On the plus side, I’m starting to develop some really buff arms.

You Gotta Slow Down 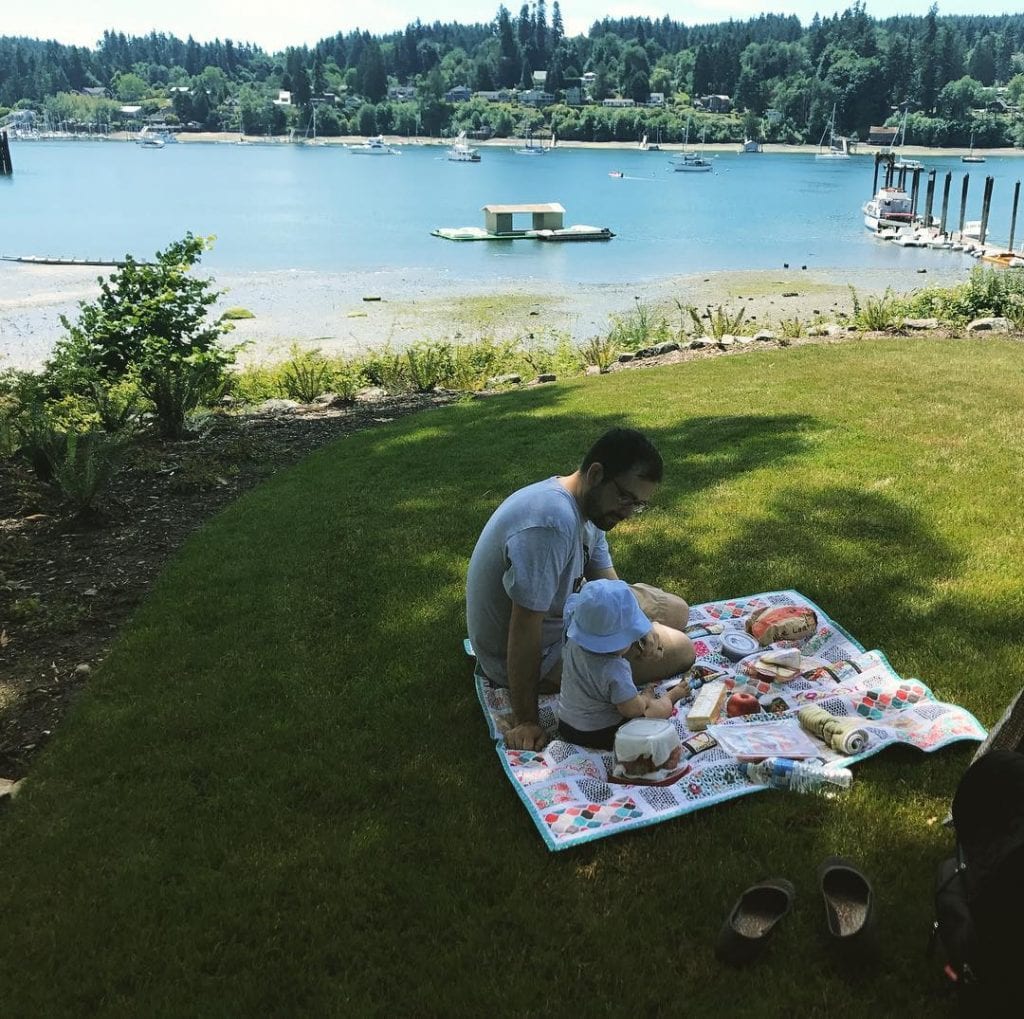 Probably the biggest adjustment when it comes to traveling with a tiny human is the pace of travel. While once I would easily cram three or more destinations in a single week, I would never attempt that now with baby in tow. It just seems like a recipe for total exhaustion while seeing nothing.

When I went to Chicago with Marcella in June, I was awoken to the many ways the pace of travel was different now. We did barely any of the things on my, quite modest, list. Instead we visited with friends, ate some yummy food, and sat in the grass watching a Korean high school dance troop.

I think that’s how it’s going to be for a little while now. Ambitious travel will have to sit on the shelf for a bit, but that’s okay. More room for sitting on the banks of the Chicago river, eating gelato and watching boats go by.

Take All the Help You Can Get 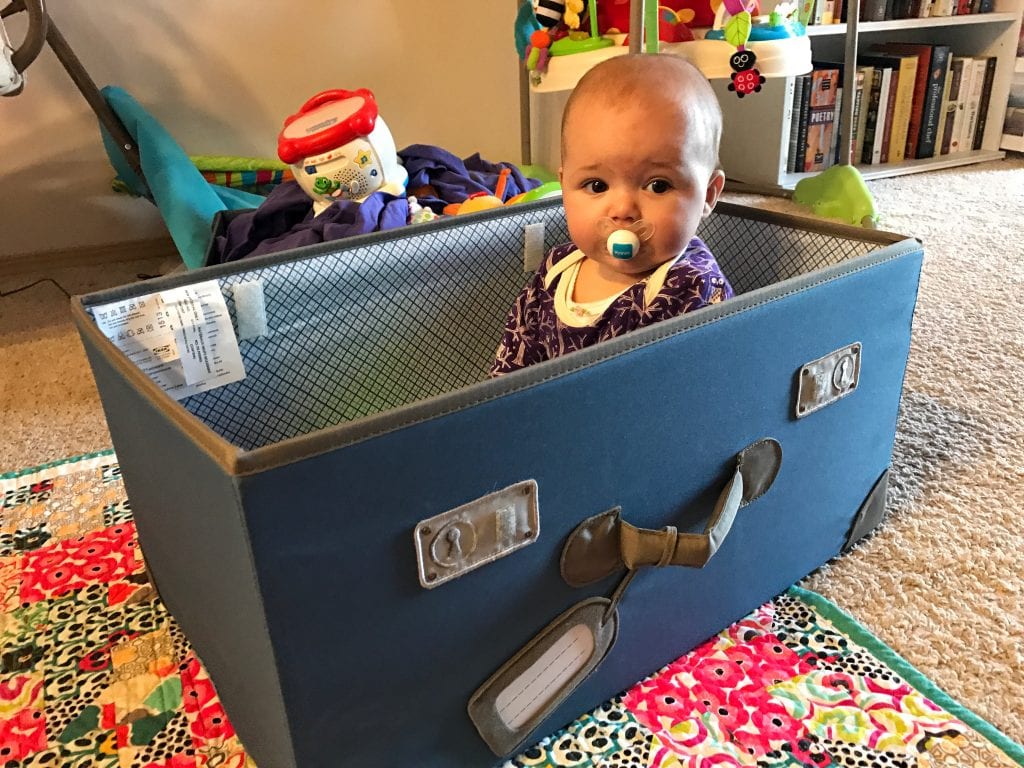 We went to Colombia with Mike’s family and it was by far the easiest experience I’ve had traveling with the baby, even though it involved the most flights and weirdest logistics. Having 5 extra sets of hands to hold the baby during the flight, play with her at the airport and keep her from pulling the tv over at the AirBNB was great.

Look at the World with New Eyes 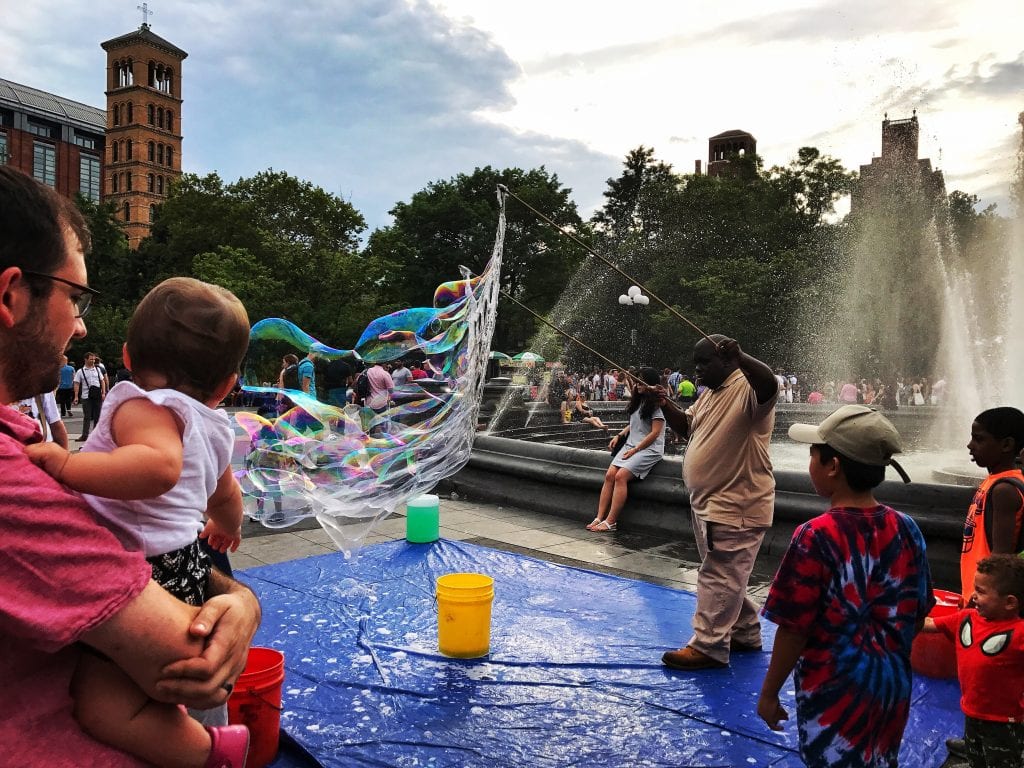 I mean, literally, new eyeballs. Probably the most exciting thing about traveling with your kid is seeing the world through their eyes. Everything is novel and strange and interesting. Even for babies, who really don’t know exactly what’s going on, there are so many new sights and sounds and smells to experience. It’s a hard feeling to describe, especially if you’ve never spent much time around kids (I never really did before I had one), but it’s thrilling in a new way.

When I’m traveling with my daughter moments that were previously insignificant take on new meaning. Things I wouldn’t look twice at are suddenly fascinating, while other stuff I thought I cared about fades away.  Its disorienting and, for a jaded frequent traveler like myself, pretty damn exciting.

This is what thrills me the most about traveling with Marcella, because I know it’s only going to get better as she gets older and takes an active interest in the world. Teaching her about how amazing this planet can be is a great reminder for myself. And that will make it all more than worth it. 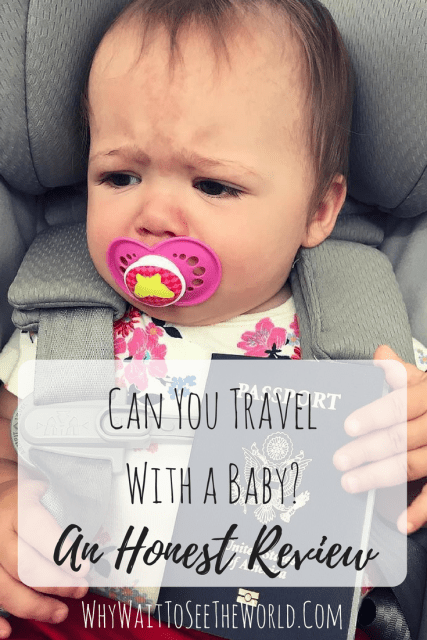 10 thoughts on “Can You Travel with a Baby? An Honest Review”