Vodka, vodka, more vodka- and maybe a little bit of borscht in-between. Just before embarking on the long Trans-Siberian route, that was pretty much how I pictured my Russian gastronomy experience. As somebody who is more of a rum drinker, the expectation of downing vodka constantly throughout the train ride was a little daunting; even advice from Lonely Planet to pretend you are an alcoholic didn’t qualm my fears. However, I was delighted to find out that there are plenty of delicious Russian dishes on offer along the road.

Here is my pick of the top tasty Russian dishes to look out for. I’ve also included the Cyrillic version of each dish in brackets, so you know what to try and spot on a menu; from personal experience (somebody who, because of the Cyrillic translations, for weeks called Moscow ‘Mockba’ and the bar a ‘bap’), Cyrillic takes a little getting used to. Enough about language- onto the Russian dishes!

1. BORSCHT (Борщ): The beetroot beauty of a soup, ideal for breakfast, lunch and dinner. Such versatility and the soup’s simple scrumptiousness make it highly desirable with locals and tourists alike. The downside to this? Often we found a restaurant’s current batch of borscht ‘sold out’; those flavours come from slow-cooking beets, cabbage, onions, garlic and dill to name but a few, and cannot be whipped together on a whim. Sometimes with meat, sometimes without- always delicious and a staple of the Russian dishes.

2. BLINI (Блины): Everybody remembers the first time that they tried caviar (икра); mine was the ‘red’ or salmon variety (Красная икра) in Khabarovsk, stuffed inside blini- thin Russian pancakes. Not only was this a cheaper way to try the notoriously expensive Russian fish-egg dish, but it also provided a variety of tastes and textures: chewy and firm, fishy yet with a nutty wheat taste. The perfect starter to a meaty main meal, or snack to tide over travellers with a confused body-clock (pretty much everybody).

3. LAPSHA (лапша): A Russian noodle soup, and one of our first meals upon arriving into Vladivostok. Many Russian dishes were designed with the country’s bitter winters in mind; however, this dish, with its velvety texture and comforting chicken flavours, is a fantastically heartening dish for all seasons. Created by the Tatars, a Russian minority group based mostly in Tatarstan, lapsha does not just come in chicken broth: the mushroom and milk varieties are also delicious.

4. PELMENI (Пельмени): You may have had the Nepalese momo, Chinese won ton or Polish pierogi- but Russian pelmeni are dumplings with a difference. With slightly thinner dough than its counterparts, the meat is a much more significant part of the overall taste. Sour cream complements those marvelous meaty flavours fantastically- in fact, both sour cream and dill are essential garnishes to all Russian dishes.

5. OMUL (омуль): Endemic to the Baikal region, this deliciously salty, salmon-tasting fish is not to be missed. If you take a boat trip across Lake Baikal, the deepest lake in the world, watch out for the ‘Baikal Ballet’, with omul leaping into the air. While you may encounter ‘smoked omul’ in the lake’s busiest tourist areas, the locals actually prefer this dish salted; I personally prefer the former, but it is definitely worth trying both. While in the nearby city of Ulan Ude- also the gateway to Mongolia from Russia- I tried an omul salad called stroganina (Строганина)- finely cut omul garnished with salt, pepper and onion. Вкусный- or should I say, delicious!

6. PIROZHI (Пирожки): We first tried these baked stuffed buns on our 38 hour train ride from Chita to Ulan Ude, courtesy of the train catering ladies who would wheel all sorts of tempting Russian dishes into our kupe (second class carriage). A sumptuous oatmeal filling mixed with cooked meat, wrapped in a mouth-wateringly flaky golden pastry…what’s not to like? They also come in a sweeter variety, with jam, cottage cheese, or stewed fruits; alas, we did not happen upon these along the way. A quick warning to vegetarians; with our limited Russian, we never quite knew what we were getting, so make sure you brush up on the following phrase, written phonetically for ease: “Yah nye yem meeyasa” (I don’t eat meat).

So, the above is just a snapshot of Russian dishes you may come across along the Trans-Siberian route. That’s before all the snacks that you will be tempted by on the station platforms; Russian ladies will be there waiting to sell you everything from dill pickle (an absolute must with a vodka shot) to raspberries and strawberries (good to get one of your five a day after the meat-heavy Russian diet).

I’ll leave you with one final dish that I tried on a rainy Trans-Siberian train journey; I’m one of those people that will try any bizarre dish, just out of curiosity. A salad with chicken, cheese, apples, prunes, mayonnaise, lettuce…and to top it off, a squirt of ketchup. Sounds delicious, right? It actually was, believe it or not- which is why I urge every prospective Trans-Siberian traveller to enter Russia with an open heart, an open stomach- and most definitely, when it comes to weird and wonderful food combinations- an open mind.

Love Food?  Check Out These Other Food Travel Guides:

Guide to the Foods of Kyrgyzstan

Japan on a Budget: A Food Lover’s Guide to Eating Cheap in the Land of the Rising Sun

Alec Bertram is a New Zealander who has spent years backpacking and working throughout Europe and Asia before settling into a grown-up job in digital marketing. He’s a dedicated traveller and occasional blogger at broke.travel, where he writes about his experiences travelling with no money. You can tweet him @KiwiAlec, or find him by walking around East London and calling out his name. 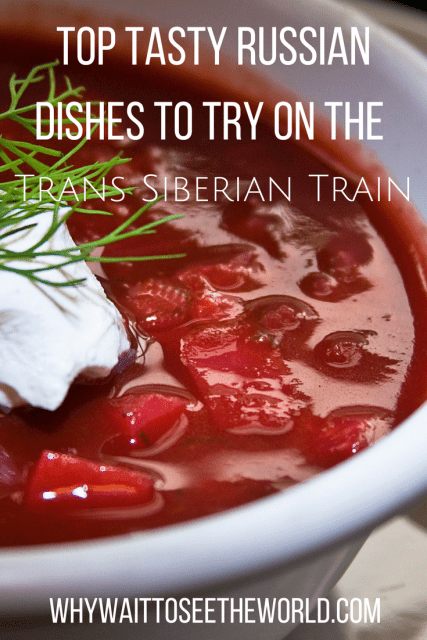