As I mentioned in my first segment on my favorite regional specialties from the East Coast, sampling the local cuisine is what truly makes any travel experience complete. During my summer traveling 27 states in the U.S., I stumbled upon many fantastic dishes that were famous among the residents and even the rest of the country. These were dishes that reflect the area, have a fascinating history, and that the locals take pride in. But sometimes that pride turns into a heavy competitive attitude when a rival dish challenges the famous status or claims it’s better.

I can’t tell you how many times I’ve eaten a “Buffalo wing” without a second thought that they are appropriately named after the city where they were created: Buffalo, New York. There’s a few different versions as to how this popular appetizer came to be, but it’s widely believed that the owner of Buffalo’s Anchor Bar wanted to make a unique, quick snack for her son’s friends. So she took chicken wings, fried them, and mixed hot sauce with butter to create the legendary sauce. Today, wings are served across the country and can often be found with celery, ranch, or blue cheese.

The city hosts an annual wing festival each year, but the competition is happening all year round between two local spots. The original, Anchor Bar, which has been opened since 1935, now rivals Duff’s Bar for who is serving the best wings. Only 6 miles Northwest of Anchor Bar, Duff’s actually won the votes on the Travel Channel Show Food Wars when the two faced off. I only had time to visit one wing place on my journey so I opted for the original and was not disappointed. The wings were crispy, but juicy on the inside, and the sauce had a great kick. 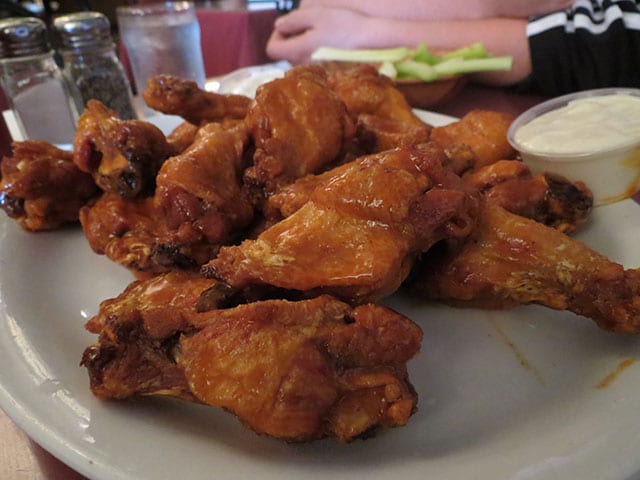 Italian immigrants brought pizza making to New York City, and the love for the cheesy food has not left the city since. People believe that the minerals in the water in New York is what makes the crust so unique, and it can’t be replicated anywhere. The food reflects the city since fast paced New Yorkers grab the thin slice, fold it, and eat it on the go. The city is so correlated with pizza that there are actually two separate battles going on. One is among each of the pizza places that claim they are the best pizza in New York. But the other that literally hits home with me, is the battle with Chicago pizza. Chicago deep dish pizza is a much thicker crust that is usually eaten with a fork. Having lived in Chicago my whole life, I was eager to try pizza at the famous Grimaldi’s in Brooklyn. The pizza was simple, flavorful, and delicious. 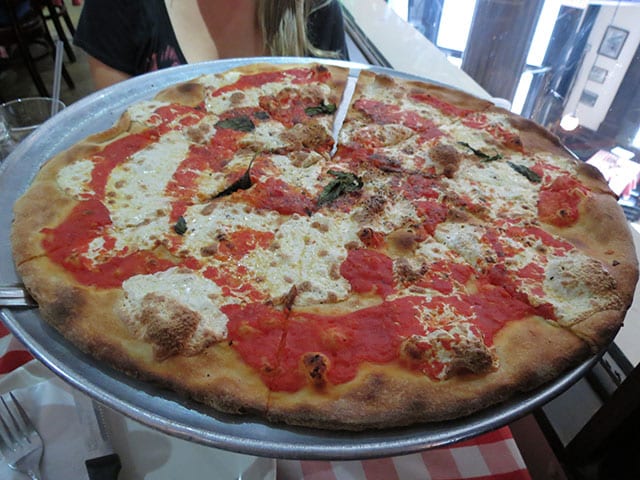 Philly Cheese Steak sandwiches may appear on menus throughout the United States, but nothing beats actually eating one in South Philadelphia. Soft and slightly chewy bread is filled with steak, and whether it should be chopped or sliced is highly debated. Philadelphians may speak English, but they have their own language when it comes to ordering. You can order the sandwich “wit or wit out” which is with sautéed onions or without and your choice of cheese. Traditionally, the sandwich is served with “whiz”, also known as bright orange cheese whiz, which makes the sandwich. Other toppings can include peppers, mushrooms, provolone cheese, and marinara sauce. I didn’t have to travel far to try both rival sandwiches from Pat’s and Geno’s since they are right across the street from each other. To my native palate, they were similar though Pat’s steak is chopped, and Geno’s is sliced. Both were good, but my favorite was the original Pat’s. 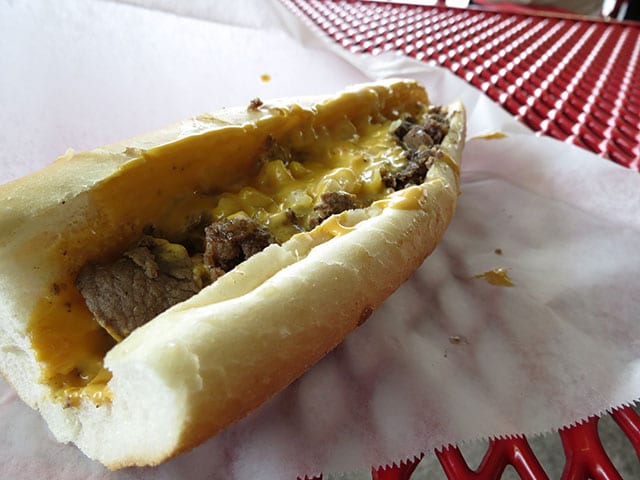