Not as many backpackers are passing through Uruguay compared to some of the other countries in South America. I’m not sure why either. It’s a small country but has so much to see and do.

Renting a car either at a city or outside of the city is a popular tourist activity in Uruguay. There are loads of car rental places in every major city. Since the country is small, it’s an easy, short, and pleasant drive to each destination. Each major city along the coast only takes 2-3 hours to get to from each other. The benefits of driving are obvious, you get to stop whenever you want. There’s small beach towns all along the Uruguay coast and the roads are in perfect long-distance driving conditions (assuming you take the right roads).

The first thing you’ll need to consider is your budget and how much time you want to have driving the Uruguay coast. One day rentals are limited on distance and not worth it unless you just want to explore a single city. Your best option will be to rent a car for multiple days. From Punta Del Este, it cost me $50USD a day for two days. It’s expensive for one or two travelers but split between four and it’s a bargain. Compare that to about $12~ for one way bus ticket at a city 2-3 hours away (Punta Del Este to Montevideo perhaps). At four people, that’s nearly the same price as renting a car for an entire day. We met two wonderful people at a hostel in Montevideo that joined us and made the car rental much cheaper. Ask around the hostel if you don’t have enough people to go along with you.

You only need two hours in Colonia with one of their small golf carts to see most of the city and the coastline. It cost me $25 for two hours.

Dropping a car off at another destination is rather pricey. For me, it was going to cost $150 extra to drop the car off in Colonia instead of Punta del Este. So just keep this in mind if you decide to rent a car to explore the Uruguay coast.

On our first day, we stopped at a few places including Jose Ignacio. Our final stop was at Punta del Diablo where we stayed for the night. If we had known Cabo Polonio was just as beautiful, we would have stayed there instead probably. On our second day, we stopped at Cabo Polonio, Agua Dulce, Castillos, and La Paloma. We had no idea Santa Teresa was supposed to be nice but I had heard others say they recommended it.

On your drive up the Uruguay Coast from Punta del Este, you’ll see sites like:

I noticed there isn’t any info online about driving the Uruguay coast. Hope this helps someone else preparing for their trip.

Tips for Driving the Uruguay Coast

Headed to Uruguay?  Read On:

Uruguay: The Best and The Worst

Things You Don’t Know About Uruguay 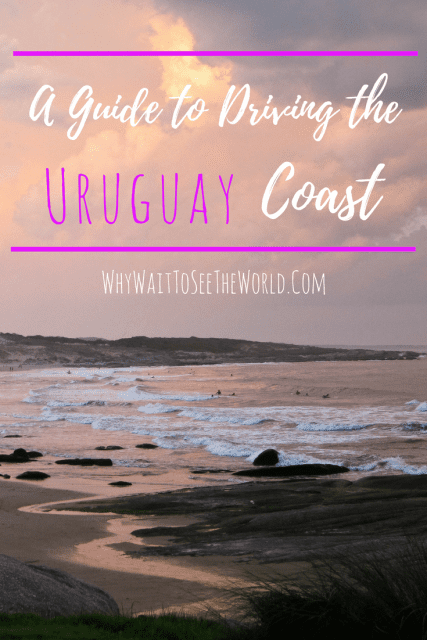