Quick, do you know which country has had the most bombs dropped on them in history?

It’s not Germany or England. It’s not Vietnam, although that’s a pretty reasonable guess.

The most bombed country of all time is Laos.

Small, quiet, unassuming Laos, wedged between Thailand and Vietnam, has had almost as many bombs dropped on it as all the countries in World War II. Combined.

This is not something that I ever learned in history class. This was and still is a HUGE issue for people living in Laos. I was interested in knowing more, so I used my first afternoon in Laos, to bicycle out to the COPE center in Vientiane. 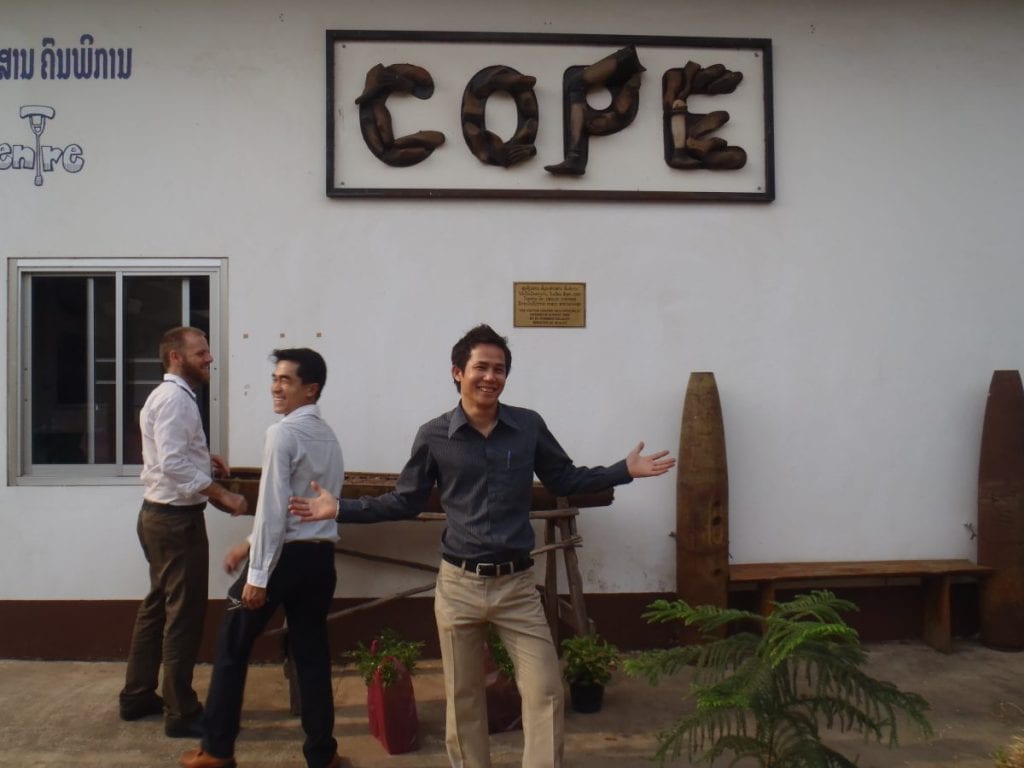 At COPE I met Nam, a handsome young guy in a suit who insisted I take his picture, before asking me out on a date for later that night. Charmed, but taken, I let him down easy. He then insisted I watch an hour-long Australian documentary called Bomb Harvest. Nestled into the soft cushions of the center’s “cave” I learned quite a bit about the bombing of Laos and Laos’ violent history.

During the Vietnam War, Viet Cong forces used Laos as a pipeline for moving supplies and troops. As a result, the United States lodged a “Secret War” on Laos, basically pummeling the crap out of the central and eastern parts of the country. We’re talking “one B-52 bomb load every eight minutes, 24 hours a day, between 1964 and 1973” according to Wikipedia. That’s nine years during which the United States dropped 1.8 million pounds of explosives on “anything that moved.”

The general public had absolutely no idea this was going on at the time, and I’m willing to bet most people still have no clue about Laos’ violent history. That’s pretty horrible, but here’s the real problem nowadays: a lot of those bombs never went off. Like 80 million pounds of them. There’s millions and millions of pounds of active explosives, just lying in wait.

People are stumbling across these every day in Laos and getting blown to pieces. Each huge cluster bomb dropped on the country broke apart into hundreds of small round “bombies.” They look like grapefruits or tennis balls and can go unnoticed for years. An average of one person and 4 cows a day are maimed or killed by unexploded ordnance (UXO).

This is where COPE comes in. It’s a non-profit organization that aims to help people who’ve been affected by the explosions leftover from Laos’ violent history. It particularly focuses on individuals who require prosthetic limbs- very expensive but necessary pieces of equipment. In a country so devastatingly poor, with so many injuries, their work is really invaluable.

One of the biggest hurdles is educating rural people about the dangers of cluster bombs. Particularly at risk are children who are unfamiliar with the bombs and may not even know what they are. Many people are unaware that these explosives are still dangerous and are purposely seeking them out and handling them. Scrap metal is a precious commodity which causes people to take absurd risks with live bombs. The metal from one bomb casing could feed a family for months.

There simply isn’t the money or the resources to find and defuse all the bombs. They are everywhere, some hiding deep underground, waiting to emerge. So work like COPE’s which minimizes and manages the damages is really important.

By the way, this isn’t just a problem in Laos. UXO’s are a huge danger, spanning three continents and including countries like Serbia, Kosovo, Uganda, and Cambodia. Oh, and Iraq and Afghanistan.

Because if you can believe it, the US is STILL using cluster bombs. Or at least they were in 2006. As an American, I find this horrifying. Over 108 countries have signed the “Convention on Cluster Munitions” in Oslo, Norway. The United States was not one of them.

As you can see, this was one really eye-opening afternoon. I know there’s more to Laos beyond Laos’ violent history, and I can’t wait to discover it, but I think it’s really important, as backpackers and world travelers, to remember the greater context of the places we visit, and the problems they face.

Find out what you can do to stop cluster bombs.

And Look into Laos’ Violent History with Part Two

Explore Laos Beyond its Violent History:

The Fierce Temples of Luang Prabang

The Mysterious Plain of Jars 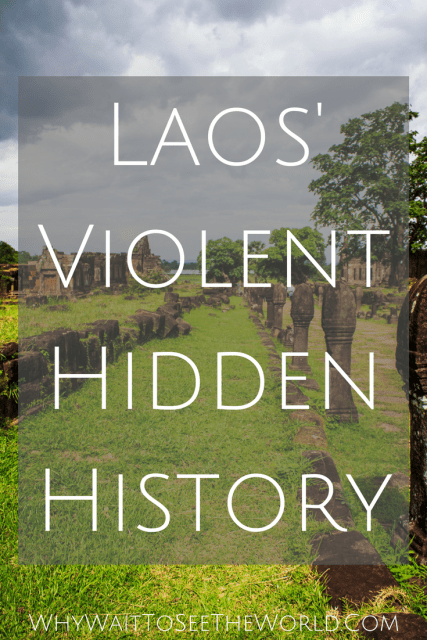