To be honest, I wasn’t sure that it could be done, but the map doesn’t lie. The Seattle neighborhood of Ballard has 10, count-em 10 microbreweries clustered in a 2-mile radius. That’s 10 Seattle breweries that are all unique and different beer producers, many of which don’t even export past the Seattle city limits.

So when my beer-enthusiast friend Matt came to visit in July, we decided to give it a try. Just me, my husband, and a kid I’ve known since kindergarten tackling 10 Seattle breweries, one day. It wasn’t easy, and I didn’t feel that great at the end, but it was a lot of fun and a great introduction to Seattle’s intense beer scene. I would definitely recommend the experience to any beer lovers with a strong liver and an afternoon to kill.

When attempting to plan this DIY tour, a lot of the information I found online was either wrong or out of date, so here’s what you need to know to attempt the feat yourself. Or, if you want to just pick and choose a few, that’s fine too:

How to Get Started

The rules to our personal challenge were simple. We wanted to visit all 10 Seattle breweries and we wanted to try the beer at all of them. We weren’t looking to make ourselves sick, so we decided to split one sampler tray at each brewery (there were three of us, so we split 3 ways. Thankfully none of us are squicky about sharing beverages). A sampler tray typically has between 4 and 6 3-oz pours of beer so we could try a variety of different beers. We also chugged a full glass of water at each stop. Even so, we were pretty tipsy by the end, so I wouldn’t recommend drinking much more than that.

The Ballard neighborhood website has a decent map of the different breweries in the area. Some of the Seattle breweries also have pre-printed maps that you can pick up, although they weren’t completely up to date. Thrillist also has an itinerary with some good info, but it doesn’t quite make sense geographically speaking. Here is my recommendation for the most logical way to make your way through Ballard:

I suggest starting with Hale’s Ales, which opens 11:30 AM on weekdays (11 AM on weekends). If you are coming to the area via bus from downtown, there is a stop nearby. This itinerary ends near Ballard Avenue so you can go grab some drunk food afterward. If you keep up a decent pace you’ll probably be done around dinner time. 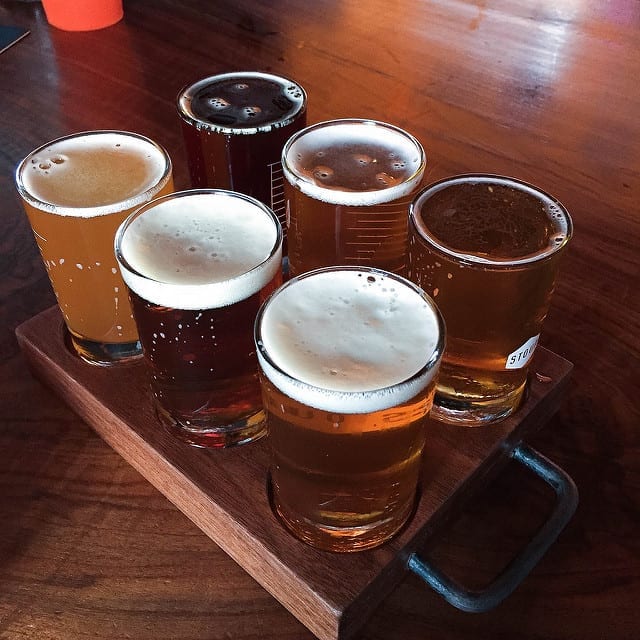 Presented in the order I recommend visiting them:

Hale’s is a literal pioneer when it comes to microbrewing. They were the first independent brewery to open in Seattle, way back in 1983. You can tell from the décor here they haven’t updated the place much since ten, but you’re here for beer not ambiance. You’ll find more than a dozen beers on tap.

If Hale’s is a classic, Bad Jimmy’s is the hip new badass on the block. Their beers are experimental, a little strange, but very, very good. This was our unanimous favorite stop of the day.

Must try: Habanero Amber and the Cocoa Vanilla Porter

Populuxe is a popular favorite because of its great hangout space, including a courtyard with a firepit and cornhole, as well as it’s pretty tasty beers. They have a rotating tap of 9 beers, usually heavy on the IPAs (like most Northwest brewers).

Must try: the American Blonde

Lucky Envelope is quite new and as a result, it’s left off of most of the pre-existing lists. When we went in July they had literally just opened. They rotate their taps with small batch and unique beers that you probably won’t find elsewhere.

Stoup was one of the liveliest, cheeriest of the Seattle breweries we visited. On a sunny day, the patio was packed with people enjoying the weather, the food trucks, and the beer. If Seattle were Austin, maybe it would look like this. The beers were all exceptionally hoppy if you’re into that (I’m not).

Reuben’s is pretty popular in Seattle and you’re likely to find it on tap many places, but there’s nothing quite like going to the source. In this case, the source is a Kickstarter funded taproom that is perpetually crowded.

I’ve been to the Jolly Roger twice and while I haven’t found the beers to be very impressive, it’s one of the few places on the list that actually offers a full menu along with their beer and you may need some food in your stomach at this point. Try the dry hopped apple bread pudding!

This is actually only one of the three Seattle breweries that is bicycle themed. You will find plenty of cyclers in here along with regular old drinkers. There is an indoor bicycle rack, a spacious back patio and of course some pretty good beer.

I’d never heard of NW Peaks before this excursion and they were actually one of my favorites of the entire day! Mainly because they have a ginger flavored beer and I LOVE ginger beer. They are small but have lots of great and unique stuff brewing here.

Hilliards has a grand but minimalist space and beers in cans, not bottles. They don’t do tasters here, but you can get a glass for $5.

Must Try- the Murdered Out Stout

Where to Eat on Your DIY Seattle Breweries Tour

An unhappy surprise is that most of the Seattle breweries in Ballard do not serve food beyond maybe a bowl of crumbly pretzels. Food is obviously important if you’re trying not to die of alcohol poisoning. So here are your best options:

Food at the Breweries– Only Hale’s and Jolly Roger Taproom serve food to go with their beer. Neither of them has exceptional food, but in a pinch, it will fill you up.

Food Trucks– On the weekend several of the Seattle breweries have food trucks in the late afternoons. The food trucks rotate so it’s hard to know what you’re going to get, but they can be fun. Populuxe, Lucky Envelope, Reuben’s and Stoup often have food trucks. Note that they often don’t show up until mid to late afternoon so this isn’t really a lunch option.

Most others breweries will happily let you bring in food from nearby establishments, although the selection around most of them is pretty sparse.

Post-Crawl Munchies– If you don’t get enough to eat on your tour (we didn’t) head over to nearby Ballard Avenue where there are quite a few restaurants ranging from Mexican to sushi to oysters. I recommend Ballard Pizza Company for some super delicious cheesy carbs. After all, what goes better with beer than pizza?

Ready to Crash After the Bar Crawl?  Why Not Try These Places to Stay in Ballard

Ballard Inn is a historic building that has a modern take on the traditional bed and breakfast.  The rooms are modern and cozy and the inn offers panoramic views of Puget Sound and the Olympic Mountains.

Hotel Ballard is a boutique hotel with old world charm.  This hotel has 29 elegant rooms and is host to the Olympic Athletic Club and Stoneburner, a Mediterranean inspired restaurant with stone-hearth cooking.

Take your time, enjoy the experience! On nice days many of the Seattle breweries have patios for lounging on, complete with games and sometimes live music. Make some time to soak up the ambiance.

Obviously, you need to be careful when sampling this much beer. Our strategy was to eat plentifully and to down at least one glass of water at each brewery. Even with this, I ended up feeling pretty icky and passing out at about 8 pm. Definitely pace yourself- you are aiming for buzzed, not plastered.

If by some miracle you haven’t had enough to drink yet (I swear, my husband wanted to keep going), Fremont Brewery is an easy bus ride away. For the rest of you, time to head home and nap.

Looking to Visit Seattle?  Here are some other great travel ideas for Seattle!

How Much Does It Cost? A Weekend in Seattle

Booze and Boos in Tacoma – Tales from a Seattle Ghost Tour

An Insider Guide to Capitol Hill

Exploring Seattle Via Seaplane with Viator

Grown-Up Seattle at the Inn at the Market 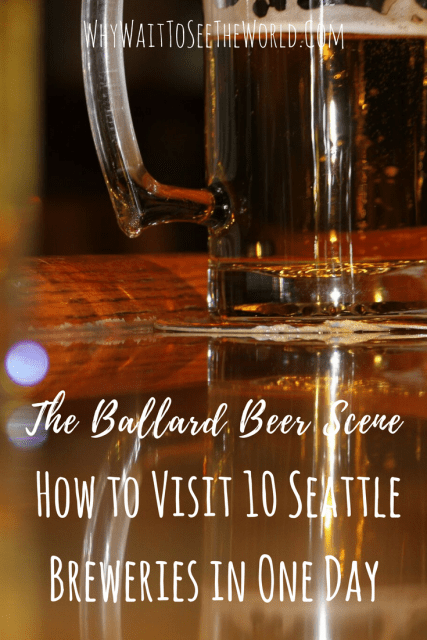 3 thoughts on “The Ballard Beer Scene: How to Visit 10 Seattle Breweries in One Day”